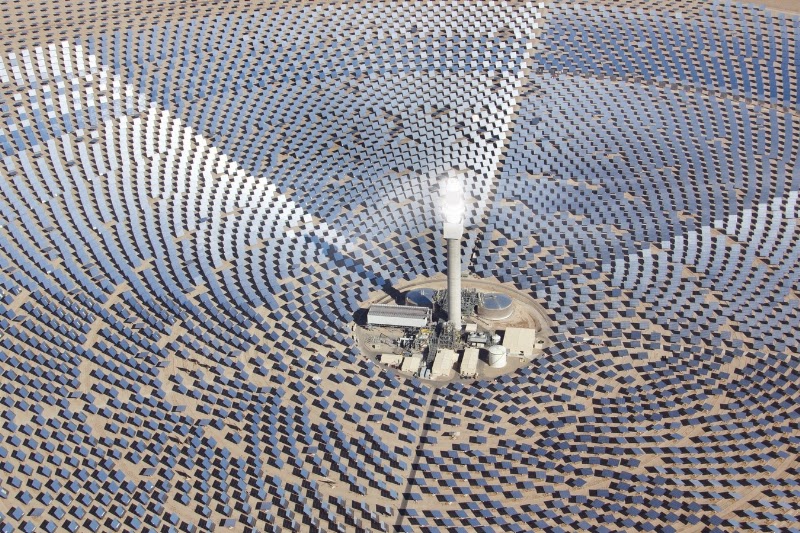 Since the heliostat field can account for up to 50% of a CSP project’s capital cost, it is a critical component in any cost reduction initiatives (Photo: Business Wire)

SolarReserve was selected as a part of the Energy Department’s FY2018 SETO funding program, an effort to invest in new projects that will lower solar electricity costs and support a growing solar workforce. SolarReserve’s project is to develop a best-in-class next generation heliostat design, optimized for CSP technology projections of the next decade. “We are excited to participate in this initiative and aggressively drive innovation that will lower delivered cost of solar electricity that has the added benefit of round-the-clock availability through energy storage,” said Kevin Smith, SolarReserve’s CEO. “Through this award, we can develop breakthrough solutions for cost-effective sustainable energy now and for the generations to come – with the goal of fostering new industries and creating thousands of U.S. jobs.”

SolarReserve continually performs research and development in all areas of CSP technology, including heliostat development. Heliostats are the dual-axis solar tracking mirrors that concentrate and focus the sun’s energy onto an energy collection receiver atop a central tower. Within the receiver, fluid flows through piping that forms external walls? this fluid absorbs the heat from the concentrated sunlight. In SolarReserve’s technology, the fluid utilized is molten salt, which is used both as a heat transfer fluid as well as a thermal energy storage medium.

The SETO award supports SolarReserve’s development of a next generation heliostat system that aims to make substantial progress in cost reduction and performance for the concentrating system in a solar power tower, aligned to the timing goals of the Energy Department’s Generation 3 Concentrating Solar Power Systems (Gen3 CSP) program. Gen3 CSP projects are working to advance next-generation CSP systems that can operate at higher temperatures in order to store more heat, reducing the cost of CSP systems by increasing the efficiency of the plant. Since the heliostat field can account for up to 50% of a CSP project’s capital cost, it is a critical component in any cost reduction initiatives.

SolarReserve will partner on the project with South Africa’s Stellenbosch University and New Mexico based Sandia National Laboratories, to leverage their complementary innovations and world-class testing facilities.
SolarReserve is experienced in advanced heliostat and collector field design, deployment and controls. The company’s heliostat innovation areas include advancements in pointing accuracy, optimal structural design, high precision and efficient drive systems, ultra-light and high reflectivity mirror facets, and various unit and collector field control, power and communication systems. Stellenbosch University has extensive experience with heliostats and has developed fully autonomous heliostat technology with complementary innovations including rapid deployment and low lifecycle cost potential. Sandia National Laboratories offers state-of-the-art CSP testing facilities at the National Solar Thermal Test Facility (NSTTF) operated by Sandia for the U.S. Department of Energy, as well as resources for autonomy and optics research. For over 10 years, SolarReserve has partnered with Sandia to test and validate advanced heliostat designs for its utility-scale solar thermal power stations at the NSTTF, the only test facility of this type in the United States. SolarReserve has developed, built and tested more than a dozen different heliostat variations at Sandia’s test facility in New Mexico, each with reduced cost and higher performance.

The U.S. Department of Energy Solar Energy Technologies Office supports early-stage research and development to improve the affordability, reliability, and performance of solar technologies on the grid.

SolarReserve is a leading global developer, owner and operator of utility-scale solar power projects, with more than $1.8 billion of projects in operation worldwide. The company has commercialized its proprietary ThermaVault™ advanced solar thermal technology with integrated molten salt energy storage that delivers renewable power that is dispatchable 24-hours per day. The U.S. developed technology is now one of the world’s leading energy storage technologies and allows solar energy to operate like traditional fossil-fired and nuclear electricity generation – except the fuel is the sun which means zero emissions, zero hazardous waste, and zero dependence on fuel price volatility. SolarReserve is headquartered in the US and maintains a global presence with six international offices to support widespread project development activities across more than 20 countries.