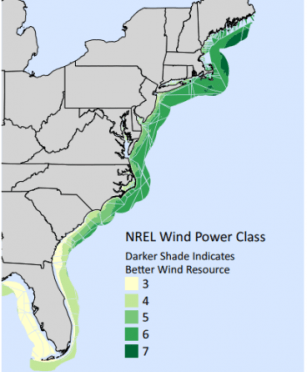 The race for offshore wind leadership is heating up, and around the country a flurry of recent announcements from states and offshore developers are shaping the future of the industry. As the offshore wind community convenes for AWEA’s Offshore WINDPOWER Conference, it’s a good time to take stock of where things stand.

Here’s a roundup of some of the biggest highlights from the past few weeks.

Currently, the only offshore wind project operating in the U.S. is a five-turbine, 30 megawatt (MW) installation off the coast of Rhode Island. But this project won’t be alone for long.

According to the Department of Energy, as of June 2018, the U.S. offshore wind project development pipeline now exceeds 25 gigawatts (GW) of planned capacity.

That means the offshore wind industry is poised to grow substantially over the coming years. States are making firm commitments to renewable energy, forming favorable policy landscapes, and advocating strongly for the development of offshore wind.

At the close of Massachusetts’s 2017-2018 legislative session, the state passed Bill H.4857, An Act to Advance Clean Energy. The bill, signed into law by Governor Charlie Baker on August 9th, included a higher renewable portfolio standard (RPS), increased energy storage and energy efficiency targets, and a goal to procure 3,200 MW of offshore wind capacity by 2035.

This increased commitment to offshore wind comes as Avangrid Renewables and Copenhagen Infrastructure Partners develop Vineyard Wind, an 800 MW project 15 miles off the south coast of Martha’s Vineyard. Vineyard Wind has secured record-low prices. The first 400 megawatts installed would start at 7.4 cents per kilowatt hour, and the second 400 megawatts would start at 6.5 cents per kilowatt hour. The average price over the 20-year contract is set to be 8.4 cents per megawatt. These prices sit well below expectations and are the lowest yet for offshore wind in the U.S. The project is projected to save Massachusetts customers $1.4 billion over its 20-year lifespan. Construction is set to begin in 2019, with the project producing electricity by 2021.

In the race for Governor, both incumbent Charlie Baker and challenger Jay Gonzalez have signed a pledge saying that, if elected, they will continue procuring offshore wind energy in the region.

Rhode Island’s offshore wind development won’t stop at the Block Island Wind Farm. In May, the state selected 400 MW from Deepwater Wind’s Revolution Wind project through a competitive process in collaboration with Massachusetts.

The wind farm will be located 15 miles off Rhode Island’s coast roughly halfway between Block Island and Martha’s Vineyard.

“We will be making very significant investments in Rhode Island port infrastructure,” Deepwater Wind CEO Jeffrey Grybowski said. “I think they will be historic-level investments that will help position Rhode Island in this growing industry. We will make Rhode Island a major center of construction and operations activity. There are many hundreds of jobs associated with this.”

This June, Governor Malloy and the Department of Energy and Environmental Protection (DEEP) announced that Connecticut selected 200 MW of offshore wind as part of a recent Clean Energy Request for Proposals that DEEP issued in January. The offshore wind project will also be a part of Deepwater Wind’s Revolution Wind project, selected by Rhode Island in May.

Construction on Revolution Wind could begin as soon as 2020, with the project in operation in 2023.

Governor Andrew Cuomo has set a goal of generating 50 percent of New York’s electricity from renewable sources by 2030, including 2,400 MW of offshore wind capacity.

While the state plans to open a solicitation for the first 800 MW this fall, the Long Island Power Authority has already approved a power purchase agreement to buy 90 MW of electricity from the South Fork Wind Farm, a 15-turbine installation set to begin construction by 2020.

In the nine months since taking office, Governor Phil Murphy has made developing offshore wind one of his highest priorities. He aims to have 3,500 MW of wind capacity by 2030 – enough to power more than a million homes.

Recently, the New Jersey Board of Public Utilities approved the country’s largest offshore wind solicitation to date – 1,100 MW of new offshore wind capacity. The board also opened the state to two more solicitations within the next four years.

In September, the New Jersey Economic Development Authority (EDA) issued a Request for Ideas (RFI) for offshore wind port infrastructure. Stakeholders such as offshore wind developers, suppliers, port operators and other agencies are encouraged to respond.

Farther south, Virginia is emerging as a strong leader in offshore wind development. Last spring, Virginia passed Senate Bill 966, an omnibus energy bill which set a target for the state to develop 5.5 GW of renewable energy by 2024, including at least 2 GW of offshore wind capacity.

Dominion Energy and the Danish firm Orsted plan to install two 6 MW wind turbines 27 miles off the coast as a pilot project. It will serve as a demonstration for stakeholders like the military, commercial and recreational groups, and government agencies.

In September, Governor Northam stated that Virginia “has a clear opportunity to act as a change agent in driving the development of U.S. offshore wind.”

The Great Lakes have a number of advantages for offshore wind development. Shallow waters, small waves, less extreme weather and nearby electric grids make for lower construction costs. If Icebreaker succeeds, proponents say it could be just the beginning for offshore wind in the region.

This summer, both the Ohio Environmental Protection Agency and the Ohio Power Siting Board gave the project preliminary approval, with final approval expected this fall.

On October 2nd, the Department of Energy released a final environmental assessment of the project which included what the agency calls a FONSI, or a finding of no significant impact. Lorry Wagner, the president of the Lake Erie Energy Development Corp. (LEEDCo.), called this “the most significant single approval Icebreaker Wind has received to date. We are eager now to earn state approval and move forward.”

If all goes as planned, the turbines could be operating in the next three years.

In August, the California legislature passed Senate Bill 100, which calls for the state to reach 100 percent clean energy by 2045. Currently, California is at 30 percent renewable energy, so offshore wind could offer a much-needed boost to the state’s renewable energy capacity.