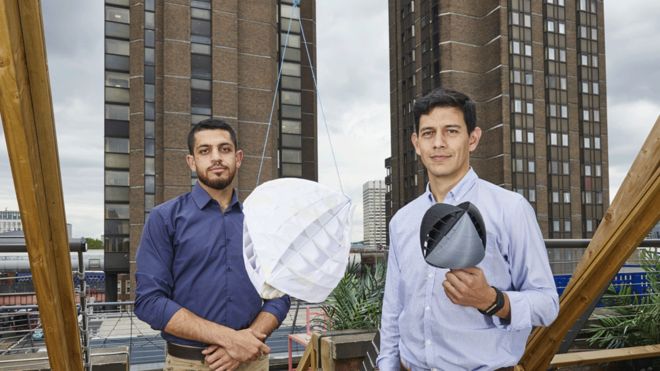 The O-Wind Turbine aims to capture inner-city wind and turn it into electricity in cities struggling to produce enough renewable energy for increasing populations.

The portable, low-cost device can be attached to the sides of buildings.

The two inventors said they hoped the energy produced could be plugged into the home or the electricity grid.

Wind power currently produces 4% of the world’s electricity. But wind farms can only capture “horizontal” wind and tend to be located in rural areas because of this.

In cities, where wind is more multi-directional because of large buildings and other obstructions, such systems are complex to use.

The inventors, Nicolas Orellana and Yaseen Noorani, set out to solve the problem.

“If we could find a solution that caters for the half of the world’s population who live in cities, we could give these people an opportunity to generate their own energy and contribute to the environment,” explained Mr Noorani.

Mr Orellana took his inspiration from Nasa’s Tumbleweed Mars rover, which was designed to roll across the planet’s surface to measure atmospheric conditions but which ultimately failed because it could not cope with the challenging conditions.

He had his eureka moment when he realised that “wind energy technology currently can only capture horizontal wind”.
Early pioneers

The O-Wind turbine is a 25cm spherical device which sits on a fixed axis. The geometric structure of its vents means that it spins when wind hits it from any direction.

This wind energy turns the device which triggers a generator, which, in turn, converts the wind energy into electricity.

The next stage of its development will focus on finding ways to build it so it will be cheap enough for anyone to buy.

“Current wind turbines are expensive to set up, meaning they are often only bought and owned by private companies,” said Mr Orellana.

“Using low-cost and sustainable materials like recycled plastic we hope to produce the O-Wind Turbine at a low cost, allowing it to be sold at a price accessible to everyone.”

From there, the team can progress to the international stage of the competition where they can compete for a £30,000 prize.

Sir Kenneth Grange, the chairman of judges said: “I was captivated by the simplicity of the design, relative to the enormous ambition of competing in the renewable energy sector.

“Developing ways to embed sustainability into society is an important challenge which will puzzle engineers for centuries, and these innovators show promise as early pioneers.”