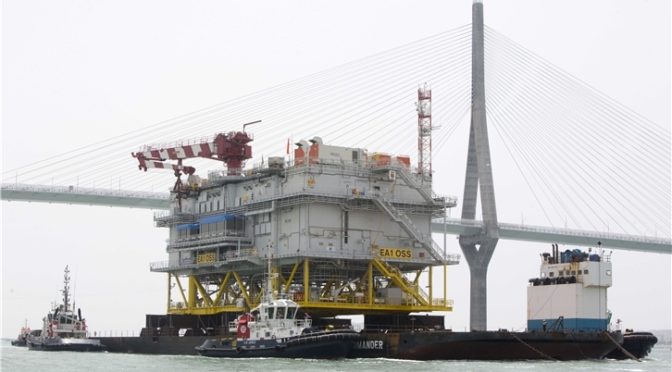 It will be installed in the biggest offshore wind power project currently being developed in the world.
The ‘Andalusia II’ substation began its sea crossing last Saturday from the shipyard in Puerto Real (Cádiz) to the East Anglia One offshore wind farm that Iberdrola is building in British waters. The loading operation started at ten o’clock in the morning and went according to plan. The substation will be transported on a barge towed by the 122-metre-long Wagenborg 9.

It is expected to reach its destination in approximately seven days, depending on weather conditions, having covered the 2,468 kilometres that separate the Bay of Cádiz from its destination in the United Kingdom, so that it can be installed at the Iberdrola wind farm at the end of August or beginning of September.

During the next few months the remaining components of the wind farm will also be installed on site, among them the piles and the jacket foundations and finally the wind turbines.

East Anglia One will enter into operation in 2020 and generate enough clean energy to supply nearly 600,000 British households.

The Andalusia II offshore substation is the central nucleus of the wind farm being built by Iberdrola in British waters: its function is to collect the electricity produced by the wind turbines and transform it from 66 kV to 220 kV. Electricity will subsequently be transmitted through the marine cable to the mainland, minimising potency losses along the journey.

Andalusia II is the biggest AC offshore substation ever constructed in the world. It features design innovations conceived by Iberdrola making for a more compact structure (3,900 metric tons), allowing it to be installed by a vessel specialising in the offshore wind sector.

The East Anglia One offshore wind farm has become one of the main economic drivers for Spanish companies. As had already been the case with the Wikinger offshore wind project (now operational in German waters), Iberdrola was supported by Navantia and some thirty local auxiliary companies in the construction of a fundamental element of the offshore wind farm, the substation.

The delivery of this unit, achieved in the agreed-upon times of 16 months of work, has allowed the creation of an average of 450 jobs -mostly local ones- which at peak times of work increased to 600 people.

Having pioneered the move into onshore wind-powered generation, Iberdrola has decided also to spearhead the development of the renewable energy source with the best growth prospects: offshore wind, in which it already has projects in operation.

Two wind farms are currently in operation – West of Duddon Sands, in the Irish Sea and Wikinger in the Baltic Sea, and a further 7,200 MW are under development in the North Sea, the Baltic, the English Channel (offshore Brittany) and off the US Atlantic coast.