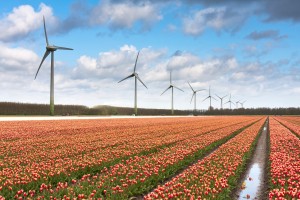 This is an increase of 10 percent relative to the previous year. Consumption of solar energy rose by over 30 percent. Biomass consumption increased as well, partly due to higher consumption of biofuels for transport. This is reported by Statistics Netherlands (CBS) today.

In 2017, solar energy consumption (for electricity and heat) increased by 31 percent to 9 PJ. The total established capacity of solar panels used to generate solar power saw a record increase from over 800 to nearly 2,900 megawatts (MW).

At the same time, wind energy production rose by 15 percent to 35 PJ. The installation of offshore wind turbines with a total capacity of 600 MW in the second half of 2016 led to a substantial rise in consumption levels; these turbines were in operation all year long in 2017. Hardly any new turbines were added last year, as a result of which total wind capacity did not exceed 4,200 MW.

Biofuel consumption by power plants and companies for electricity production rose as well last year, by 20 percent. This was mainly due to the fact that these installations started generating mainly more heat – in addition to electricity – for adjacent industrial sites.

Compared to 2016, an increase was also seen in the other types of biofuel consumption such as waste incineration plants, biogas and consumption by companies with only heat installations and households, but this was limited to a few percent.