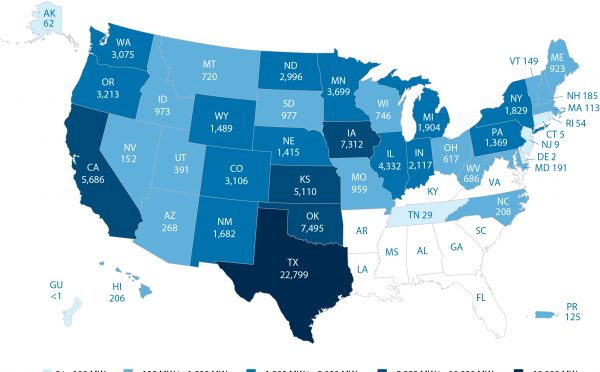 How can you tell an industry is thriving? How about a 40% year-over-year increase in projects nearing completion?

The U.S. wind industry continues to power forward so far in 2018, adding over 5.5 gigawatts (GW) to the wind development pipeline and signing a record amount of power purchase agreements (PPAs) in the first quarter, according to AWEA’s latest quarterly market report. That’s enough new wind to power millions of additional American homes.

The U.S. wind industry reported 5,523 megawatts (MW) of new project activity in the first quarter, with 1,366 MW starting construction and 4,158 MW entering the advanced development phase. There are now over 33,000 MW of wind power either under construction or in advanced development, a 40% increase over this time last year and the highest level since AWEA began tracking both categories in 2016. This pipeline will keep wind workers busy and add tens of billions of private investment dollars to the American economy.

Project developers signed 3,560 MW of PPAs during the first quarter, the strongest quarter for PPA announcements since AWEA began tracking this activity in 2013. Utilities including Great Plains Energy and Public Service Company of New Mexico accounted for 69% of this activity, while corporate customers signed over 1,000 MW of PPAs, totaling 31% of capacity contracted in the quarter. Utilities also announced plans to develop and own 1,379 MW wind capacity during the year’s first three months, led by PacifiCorp with 1,111 MW of planned wind projects in Wyoming.

Six companies signed wind PPAs for the first time during the first quarter, adding to the list of Fortune 500 companies and other non-utility purchasers powering their operations with wind energy. First-time wind buyers included Adobe Systems, AT&T, Brown Forman, Kohler, and Nestlé. AT&T led the pack, signing two PPAs for a total of 520 MW, one of the largest corporate renewable energy purchases in the U.S.

“As one of the world’s largest companies, we know how we source our energy is important,” said Scott Mair, President, AT&T Operations. “We’ve been working for a long time to ensure our wind projects deliver for both our business and the environment.”

These new players joined repeat wind buyers Bloomberg, Facebook, Nike, and T-Mobile who also signed wind PPAs during the first quarter. Corporate and other non-utility customers have solidified their role as a stable demand driver for wind, signing more than 9,000 MW of PPAs to date.

Check out more top facts from the first quarter report and the 2017 Annual Market Report here.