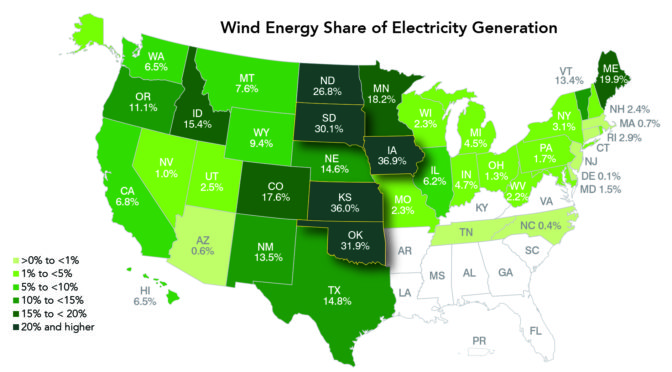 Wind power, the largest source of U.S. renewable electricity generating capacity, now supplies more than 30 percent of the electricity in four states, Iowa, Kansas, Oklahoma, and South Dakota, after strong growth in 2017. Industry leaders released the news from the state capitol in New Mexico, a rising star for wind power. New Mexico added wind power capacity at a faster rate than any other state last year. 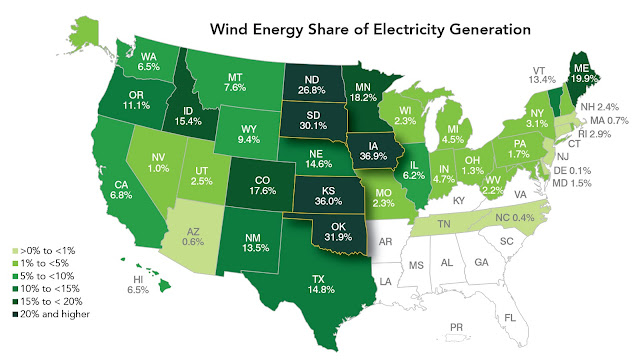 The rapid expansion of American wind power reflects its key role at the center of a transformation in the country’s electricity sector – bringing consumers more affordable, clean, and reliable energy while growing the economy. The industry’s latest trends and milestones from 2017 are detailed in the American Wind Energy Association (AWEA) U.S. Wind Industry Annual Market Report 2017 released today. According to the new report, more American homes and businesses use wind energy than ever before and the industry employs a record 105,500 men and women across all 50 states.

“You can see the future of American energy here in New Mexico, where our industry grew at a faster rate than any other state last year,” said Kiernan. “It’s a place where wind farms and transmission lines are rapidly becoming staples of the economy, creating new jobs and bringing a wave of private investment to rural communities.”

“States are where the action is happening for wind with our federal tax credit on an orderly path to phase out by 2019,” added Kiernan. “Individual states’ policy choices and the strength of their infrastructure will play a big role in determining where wind power’s future growth is channeled.”

New Mexico stands out as an emerging wind powerhouse, adding wind power capacity at a faster rate than any other state in 2017. The state added 570 MW last year—a 51 percent increase over the 1,112 MW installed at the end of 2016. Wind farms supplied over 13 percent of the state’s electricity generation last year, enough to power over 422,000 average homes. New Mexico is now ranked 15th in the nation with 1,682 MW of installed capacity, and a wave of new wind investment will soon advance the state’s leadership.

“I’m proud that New Mexico’s wind power capacity grew at a faster rate than any other state and generated an unprecedented level of private sector investment and job growth. With our robust wind and solar resources, New Mexico is at the epicenter of the rapidly growing clean energy economy.  As consumers and major companies demand cheaper and cleaner power sources, our state stands to benefit and become an even bigger leader in this booming energy sector–especially in rural communities,” said U.S. Senator Martin Heinrich. “We should be doing everything we can to meet our state’s full potential as a wind energy powerhouse, from building new transmission infrastructure to investing in job training programs. I will keep fighting for policies that move New Mexico’s energy economy forward.”

Wind’s low cost and stable prices drive strong customer demand. And new technology is helping the industry reach performance heights, with new projects operating at annual capacity factors of 40 percent and higher. As a result, the cost of wind energy is down two-thirds since 2009. Utilities and other customers, including Fortune 500 brands and American cities, have taken note of wind energy’s value and are eagerly buying large amounts of it.

In New Mexico, these trends are helping diversify the energy supply and the economy. Access to renewable energy, including abundant wind resources, was a key consideration in Facebook’s decision to triple the size of their New Mexico data center, representing a $1 billion investment in addition to more than 200 MW of wind and 80 MW of solar investment. Facebook worked alongside PNM Resources, the local energy provider, to develop a green tariff that enabled two new wind farms and additional solar resources to supply the data center. Facebook’s latest investments represent an over 50 percent increase in renewable energy in the PNM resource portfolio.

“Facebook is committed to increasing access to renewable energy resources. We are proud of the work we have done in states like New Mexico to spur the growth of renewable energy and develop green tariffs,” said Bobby Hollis, Director of Global Energy at Facebook. “These tariffs not only allow our data centers to be powered by 100 percent renewable energy, but they create new opportunities for the development of hundreds of megawatts of additional wind and solar energy. As of today, Facebook has enabled over 1,000 megawatts of renewable energy to be added to the grid in the U.S.”

“The partnership we used to provide the renewable energy for the data centers in Los Lunas will serve as a model going forward to continue to attract more economic development opportunities and jobs to our state,” said Ron Darnell, PNMR Senior Vice President for Public Policy. “Today, PNM utilizes enough wind energy in New Mexico to power 100,000 homes and that number will go higher as we continue to work together toward our common goals.”

Wind jobs are growing in farm and factory towns across America

U.S. wind power continues to create jobs across the country, employing a record 105,500 men and women. Wind projects or wind-related factories are present in all 50 states, plus Guam and Puerto Rico, and farming communities and factory towns are the biggest beneficiaries.

Nationally, wind turbine technician is one of the country’s two fastest growing jobs, along with solar installer, according to the U.S. Bureau of Labor Statistics. Mesalands Community College in Tucumcari, New Mexico, is one of the schools training the next generation of wind turbine technicians needed to operate and maintain wind farms. These well-paying, stable careers help young people stay in rural communities and grow a family, if they wish. Enrollment in the college’s wind turbine technology program has almost doubled year-over-year for the last three years, as demand continues to rise with wind farms built in New Mexico and across the U.S.

Wind turbines use no fuel, but they must be forged in factories by skilled workers. There are over 500 U.S. wind-related factories across 41 states producing components for the wind industry, fueling a domestic manufacturing sector that supports over 23,000 U.S. factory jobs.

The wind industry invests heavily in rural communities, which host 99 percent of wind farms. Ranchers and farmers were paid an estimated $267 million in 2017 to lease private land for wind farm development, while retaining the ability to farm or raise livestock under the turbines. In rural communities across the nation, wind investment provides recession-proof career opportunities and property, state, and local tax revenue to fund schools, roads and emergency services.

Wind power is not only cost-competitive, it also improves air quality and saves water. Operating wind projects avoided 189 million metric tons of CO2 and helped avoid the use of 95 billion gallons of water in 2017. That is the equivalent of eliminating carbon pollution from 40 million cars and saving 292 gallons of water per person in the U.S. Because wind power uses almost no water, less than any other energy source, farmers and ranchers in drought-prone regions have less competition for vital water resources.

Bipartisan support is strong for wind power because all Americans benefit from economic opportunity, homegrown energy, and clean air. Wind projects or wind-related factories are present in 70 percent of U.S. congressional districts, including 75 percent of Republican districts and 62 percent of Democratic districts.

The people and technology driving these wind power trends will gather in Chicago, May 7-10, for the WINDPOWER Conference and Exhibition, the Western Hemisphere’s largest wind power gathering. WINDPOWER is where the vision and business deals that will drive the future of the industry happen.