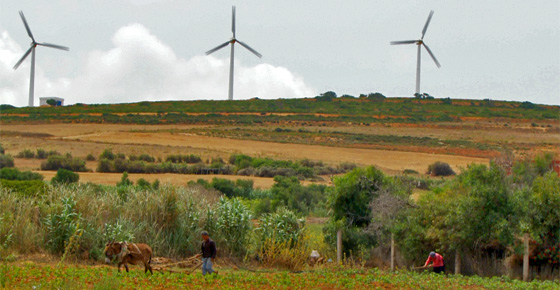 As part of its plan to install 4.7 GW of renewable energy capacity by 2030, Tunisia last week said it would hold several international tenders for solar and wind installations on April 27.

Speaking at a conference on April 5, Prime Minister Youssef Chahed said the tenders would cover the installation of 1 GW of renewable energy throughout the country. The tenders will involve a total investment of some 2.5 billion dinars (US$1 billion), and, according to the prime minister, will form a key plank in the country’s strategy to reduce its carbon footprint by 41% by 2030 in accordance with the Paris Agreement, which Tunisia has ratified.

These will be Tunisia’s first tenders for solar and wind energy. The first tranche, for solar, will amount to 300 MW and includes 100-MW plants at Gafsa and Tataouine and 50-MW plants at Sidibuzid and Tozeur. Wind farms of 200 MW are designated for Nabeul, with 100 MW slated for Kabil.

Chahed said these tenders were anticipated to generate 2 billion dinars (US$840 million) in private investment and that other tenders for 200 MW of renewable facilities were being planned by the Tataounine Governate in the country’s south. These would be worth 500 million dinars (US$209 million), he added.

Tunisia is also planning 10-MW solar projects in Kairouan, Kasserine and Tataouine as well as smaller, 1-MW installations. Chahed noted that by the end of this year, changes in the administrative procedures for installing renewable energy projects with up to 1-MW capacity would be simplified, streamlining the path for more small-scale generation.

Last week several hundred officials from Tunisia, regional and international organisations and financial institutions gathered in Tunis to discuss how to accelerate energy efficiency programmes in the country, particularly in its remoter areas. The government has stated that it sees energy efficiency as a way to create jobs and encourage economic growth.

In 2016 the country adopted an energy transition strategy – the Renewable Energy Action Plan 2030 – designed to establish conditions for the gradual and balanced change in its energy mix. The strategy focuses on the diversification of energy sources and more efficient use of hydrocarbon resources, as well as the creation of 1 GW of clean capacity by 2020, and a further 1,250 MW between 2021 and 2030.

A goal of reducing energy demand by 30% has been set, along with a target to increase the share of renewable energy in the energy mix to 30% by 2030, compared with 2010 levels. As of the end of 2017 Tunisia had around 347 MW of installed clean energy capacity, according to the International Renewable Energy Agency (IRENA), the majority of which is wind power.

This NewsBase commentary is from our REM publication. To sign up for your free trial, click this link: https://newsbase.com/publications/rem-renewable-energy