The rapid growth of renewable energy will have a profound effect on geopolitics worldwide, writes energy expert Walt Patterson, a fellow at Chatham House in London. In this article, he explores the many ways in which “fire-free electricity” will transform political and economic relations.

Geopolitics, as the name suggests, is the interaction between geography and politics. Geography offers resources. Politics determines who benefits. That of course entails recognition of resources. A resource is something we want to use and know how to use. The value and commercial status of a resource changes over time. The value depends on what a potential user wants to do, and the other resource options with which to do it.

What was once a resource may no longer be. Six decades ago asbestos was a resource. Now its hazards far outweigh its usefulness. Many people now see coal in the same way. As the evidence of dramatic and devastating climate change gets ever harder to ignore, oil and natural gas might well be next. Yet even as these traditional resources face increasing challenge, innovative resource options are rapidly emerging. The implications for the world economy and geopolitics are profound and far-reaching.

My institute in London, the Royal Institute of International Affairs, known as Chatham House, last year launched a new website devoted to resources: Resource Trade Earth. As the name indicates, it is an interactive website on which you can track the global trade in resources, year by year and resource by resource, in quantities and value. I highly recommend it, but with a warning: if you are interested in resources the site is frankly addictive, like a video game. 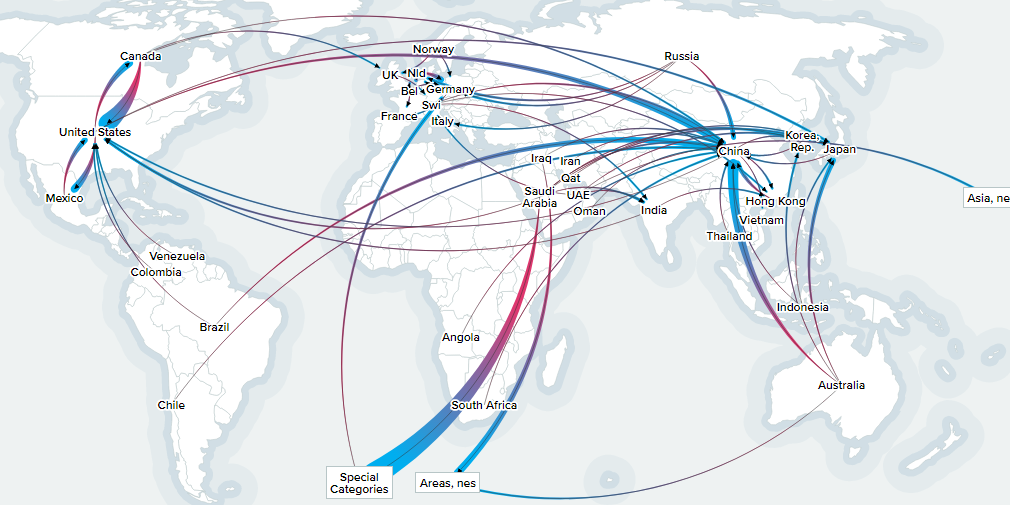 Snapshot from the Resource Trade.Earth website of Chatham House

A key use of resources all over the world is to generate electricity. Traditional electricity resources include coal, natural gas, petroleum and uranium. All figure prominently on the new Chatham House website. Competing with these, however, are other resources that cannot be traded internationally, notably wind and sunlight.

Both, of course, are specific to given locations. Unlike commodity fuels, metals and other materials, which can be extracted in one place and transported for use somewhere else, including internationally, wind and sunlight are immaterial. They have to be used where they are. Both wind power and solar power are nevertheless becoming steadily more significant contributors to electricity generation.

What are the mechanisms through which wind and sunlight could reshape geopolitics? Both our local and our global problems, urban air you can´t breathe, and atmospheric overheating of the entire planet, are ultimately caused by our use of fire, and what fire releases into the atmosphere, locally and globally. My most recent book is entitled Electricity Vs Fire: The Fight For Our  Future. It describes the implications, and what we can do about it. If you´re interested the book is now a free download from my website archive Walt Patterson On Energy.

Wind power and solar power do not use fire. They produce what most people call ´renewable energy´. I like to call it fire-free electricity. Wind and sunlight reduce reliance on fire, and thereby reduce requirements for fuel. Fire-free electricity therefore reduces the political and economic power of the fuel suppliers, both state and corporate. I call them the fire-feeders.

More specifically, wind power and solar power are already undercutting coal in some of its major markets, notably the US and Australia. Car manufacturers everywhere are rushing to develop electric vehicles, threating the major market for petroleum. Natural gas, touted by its producers as the cleanest fossil fuel, is nevertheless another feed for fire, another source of carbon dioxide. Improving the world´s vast stock of inadequate buildings, as an obvious corollary of local fire-free electricity generation, could dramatically reduce the market for natural gas. All of these developments bring with them significant geopolitical consequences.

Fire-free electricity redistributes political and economic power. It offers opportunities for participation, investment and control both to new centralized players such as the internet giants, the so-called FANGS – Facebook, Amazon, Netflix and Google – and also to more decentralized players, potentially down to neighbourhood, village and even household level, including the burgeoning potential of local microgrids.

To use the wind or the sunlight requires access to the place. Until recently, such access, by purchase or rental of land or roofs or other suitable locations, took place almost entirely within national borders. Of late, however, contracts for wind or solar electricity generation have begun to involve numerous international transactions – in effect a whole new category of resource trade.

Wind power and solar power can both be called ‘infrastructure generation’. They both require substantial initial input of materials and investment, after which the resulting physical infrastructure produces electricity, perhaps for decades, with minimal further cost. Relying on wind and sunlight thus confers a form of energy independence – unless, of course, the wind or solar generators are owned and operated by foreign entities. The requisite investment may also be by foreign companies.

It is true that rare earths caused a “bubble” around 2010-11, but their importance has since receded, as my old friend Amory Lovins described in great detail in the Bulletin of the Atomic Scientists in May last year. Other options now make the various rare earths at most a possibly useful alternative, not a requirement. On this particular issue China has been outflanked. But novel supply chains may still empower new players, even as they disempower traditional ones.

Recognition of and development of solar resources in poor countries, almost certainly requiring international support and involvement, could be a major contributor to raising the standard of living in these countries

Some countries are already positioning themselves geopolitically so as to safeguard their energy security. Because renewables such as wind and sunlight are location-specific, and therefore count as domestic resources within a national border, increasing reliance on them reduces exposure to international fuel prices and policy pressures, thus enhancing energy security. At the same time more local energy systems foster whole-system thinking.

When you generate your own electricity you are less likely to waste it, and more likely to upgrade user-technology such as buildings – again reducing vulnerability to interruptions of the energy services we actually want.

Both energy use and energy provision, particularly in the form of electricity, are already becoming more decentralized in at least some places. The trend will spread and accelerate. This will have a significant impact upon geopolitical relations around the globe. It will increase some tensions, as previously powerful plaers, the fire-feeders, find their markets shrinking, prices falling and influence dwindling – a trend they are already bitterly opposing. But it will also reduce some tensions, as some players reduce their vulnerability and enhance their security. Over time it will dramatically redraw the map of geopolitical power. 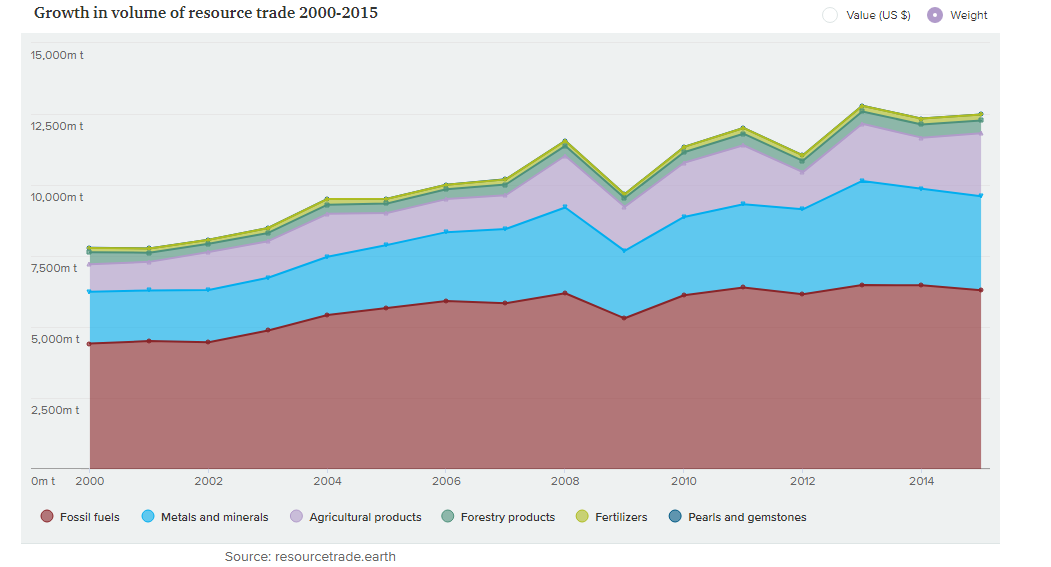 Like material resources, wind and solar resources are widely but unevenly distributed around the world. One striking feature of solar resources in particular is their availability in low-latitude areas, which include not only very wealthy countries such as Saudi Arabia but also very poor ones, notably in sub-Saharan Africa. In rural areas, decentralized local generation, especially solar, may be the most practical and feasible option to make electricity services available to the billions still without them.

Recognition of and development of solar resources in poor countries, almost certainly requiring international support and involvement, could be a major contributor to raising the standard of living in these countries, and another important factor in geopolitics.

What has been called the “resource curse” has long affected some countries with significant fossil fuels. Their economies become dependent almost entirely on oil or natural gas, to the detriment of all other sectors; the abundant rents combine with weak governance to foster corruption; and the country may plunge into violence, both domestic and international. Will a similar resource curse affect countries able to benefit from wind power and solar power? That seems unlikely. The nature of the financial transactions differ markedly, longer-term commitments rather than short-term commodity deals; and the dependence is much more diverse. Indeed, at least in some countries,  wind power and solar power may help to offset the effects of the fossil fuel ´curse´.

The speed of this electric transition will depend first of all on the political infighting now raging, in the US, China, India, Europe and elsewhere, between the traditionalists and the innovators

As wind power and solar power become ever more significant factors in the global economy, international competition or cooperation for capital investment will likewise become ever more significant. World electricity is undergoing a hectic transition, from traditional centralized generation mainly based on fuel and fire, to much more decentralized generation, more and more based on fire-free renewable resources such as wind and sunlight.

The transition is already well under way, in countries as diverse as Germany, Denmark, Australia, parts of the US, China, and India, and islands in the Caribbean and the Pacific. Wind resources are vast and widespread, even at high latitudes. Solar resources are more concentrated at lower latitudes, but are significant, albeit with some seasonal limitations, even in Scandinavia. Moreover the countries most in need of additional energy resources are themselves mostly at lower latitudes – a good fit for solar development.

For electricity grids, two different and competing trends are already noticeable. Fire-free generating technologies may lead to greater electric interconnections between nations. On the other hand, more decentralized electricity generation, especially when configured in microgrids, may make international interconnections less important. Either way, the potential geopolitical implications are complex.

In a new book that has just been published, The Geopolitics of Renewables, edited by Daniel Scholten of the Technical University Delft, a number of academic enegy experts explore the implications of the renewables revolution for geopolitical relations in the world. You can read more about it on Energy Post Weekly, our premium newsletter.

One further geopolitical factor may also come into play. A transition away from fire and fuels to fire-free electricity, if it happens fast enough, may help to mitigate the worst ravages of climate change. In doing so, it should also reduce the inevitable international tensions, instability and conflict arising from climate change, including damage by weather extremes, loss of land, shortage  of food and water and the migration of climate refugees.

Geopolitics also operates within national borders. Fire-free electricity may therefore also have substantial internal geopolitical consequences. As for international geopolitics, renewable energy, particularly fire-free sunlight and wind, reduces the economic and political leverage of the fuel suppliers – the fire-feeders – their investors and supporters. That might have a dramatic effect on a country such as the US, where fuel suppliers exercise profound influence on politics, with the US now the only country worldwide unwilling to support the Paris agreement.

As always, the fight for the future may be disguised as economics but is fundamentally political

In China a battle is already raging between traditional coal-fired generators and fire-free wind and solar generators, for access to overcrowded transmission systems. In countries such as India and parts of Africa and Latin America, local decentralized renewable electricity could further weaken the hold of the inefficient and often corrupt state electricity bureaucracies. That of course is why these bureaucracies often offer stubborn opposition to decentralized renewables. As always, the fight for the future may be disguised as economics but is fundamentally political.

This text is based on a presentation held by Walt Patterson at the Irish Renewable Energy Summit, Dublin, 31 January 2018. Walt Patterson is a fellow of the Energy, Environment and Resources Department at Chatham House in London. He has published 14 books and hundreds of papers on a wide variety of energy topics. His latest book, Electricity vs Fire: The Fight for our Future, is available as a free download on his website,  waltpatterson.org.