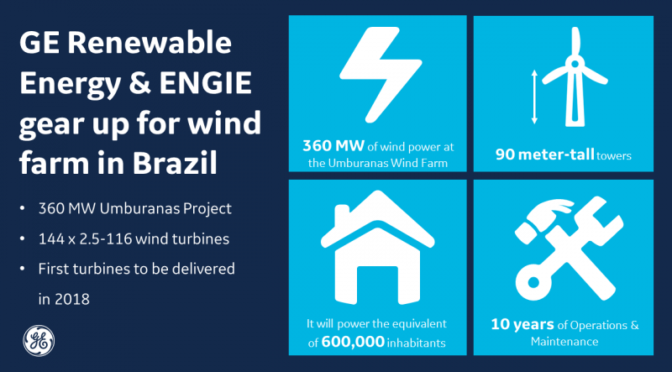 GE Renewable Energy (NYSE: GE) today announced it has signed an agreement with ENGIE to supply 144 of its 2.5-116 turbines for the Umburanas Wind Farm Complex in upstate Bahia, Brazil. This 360MW wind installment will add to the 326.7MW under commissioning by GE Renewable Energy at the neighboring Campo Largo I wind farm, also owned by ENGIE. 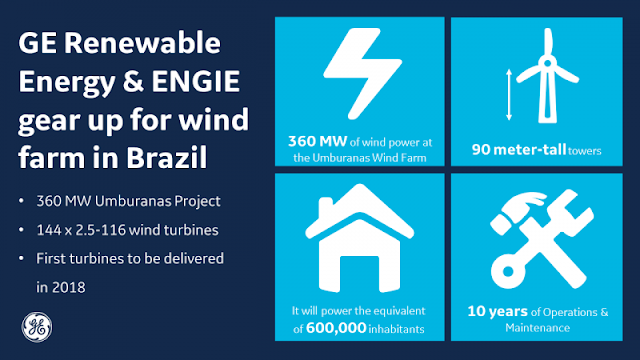 Vikas Anand, General Manager, GE’s Onshore Wind Business, Americas said “Together, these two wind farms represent our largest volume of turbines in a single cluster in Brazil. It’s a great honor to be working with ENGIE and to continue to grow the wind capacity together and increase the wind energy footprint in Brazil. This newly announced project also demonstrates our continued commitment to Brazil’s Wind industry.”

GE Renewable Energy will also be providing 10 years of Operations and Maintenance at the Umburanas Wind Farm.

ENGIE’s potential in the region of Umburanas and Sento Sé exceeds 1,300 MW. The 326.7 MW Campo Largo 1 site is currently under construction and will begin commercial operations in January 2019. It will create enough energy to power a population of up to 600,000 inhabitants. The newly announced 360MW Umburanas project has also begun construction, and the first turbines are set to be delivered in 2018.

Eduardo Sattamini, president for ENGIE Brasil Energia said “We have selected GE Renewable Energy to supply turbines for both projects and we trust GE’s commitment to implement the projects according to the agreed business plan, therefore reinforcing the partnership between the two companies”.

GE’s 2.5-116 turbine for Umburanas will feature 90-meter-tall towers. This machine provides efficiency gains to the wind farm by maximizing energy production, reducing infrastructure spending and making for an even more competitive wind levelized cost of electricity (LCOE). The turbine’s energy production is increased by as much as 32% at 8.5 m/s, compared to GE’s 1.7MW.

ENGIE is committed to sustainable growth in order to take on the major challenges of the energy revolution towards a world more decarbonized, decentralized and digitalized. The Group aims to become the leader of this new energy world by focusing on three key initiatives for the future: low carbon generation, in particular from natural gas and renewable energy, energy infrastructure and efficient solutions adapted to all its customers (individuals, businesses, territories, etc.). Customer satisfaction, innovation and digital solutions are the guiding principles of ENGIE’s development. ENGIE is active in about 70 countries, employs 150,000 people worldwide and achieved revenues of €66.6 billion in 2016. The Group is listed on the Paris and Brussels stock exchanges (ENGI) and is represented in the main financial indices (CAC 40, BEL 20, DJ Euro Stoxx 50, Euronext 100, FTSE Eurotop 100, MSCI Europe) and non-financial indices (DJSI World, DJSI Europe e Euronext Vigeo Eiris – World120, Eurozone 120, Europe 120, France 20, CAC 40 Governance).

In Brazil, ENGIE is the largest private producer of power, operating an installed capacity of 11,059 MW in 31 power plants and accounting for roughly 6% of the country’s capacity. The Group has 90% of its installed capacity in Brazil coming from clean, renewable sources and with low emissions of greenhouse gases, a position reinforced by the construction of new wind farms in the Northeast and by one of the largest hydropower plants in Brazil, Jirau (3,750 MW), located on the Madeira river and inaugurated in December 2016. The Group is also present in the solar distributed generation market and offers services related to power, engineering and integration of systems working on the development of telecommunications and security systems, public lighting and urban mobility for smart cities, infrastructures and the oil & gas industry. With 2,100 employees, ENGIE had a turnover of around BRL 6 billion in the country in 2016.

GE Renewable Energy is a 10 billion dollar start-up that brings together one of the broadest product and service portfolios of the renewable energy industry. Combining onshore and offshore wind, hydro and innovative technologies such as concentrated solar power, GE Renewable Energy has installed more than 400GW capacity globally to make the world work better and cleaner. With more than 22,000 employees present in more than 55 countries, GE Renewable Energy is backed by the resources of the world’s first digital industrial company.