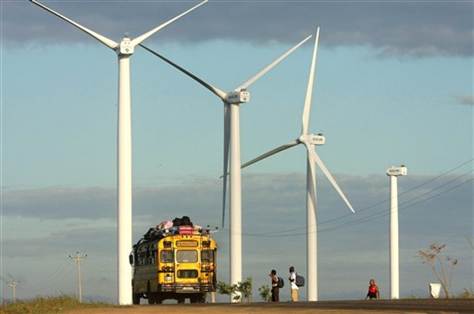 Nicaragua is today among the first Latin American and Caribbean countries that invest the most in wind energy, as part of the transformation and diversification of the energy matrix promoted by the Sandinista government.
According to a recent report by the Wind World Energy Association, the Central American nation ranks sixth in the region in terms of expansion in the sector.

This factor allows the country greater energy efficiency, with a significant impact favorable to the environment, by eliminating thousands of tons of carbon dioxide emissions per year.

Nicaragua currently has four wind farms, most of them located in the department of Rivas.

For the coming year, the Camilo Ortega wind farm is planned to expand, which with its 22 wind turbines has a generation capacity of 39.6 MW and guarantees energy to 160 thousand homes.

In this regard the director of that complex, Modesto Rojas, said that by 2018 it is planned to begin the construction of the second stage of the Park, which would have a capacity of 40 MW.