First Minister Nicola Sturgeon will officially open the Hywind project about 15 miles (25km) off the shore of Peterhead, Aberdeenshire, which could provide power for 20,000 homes. 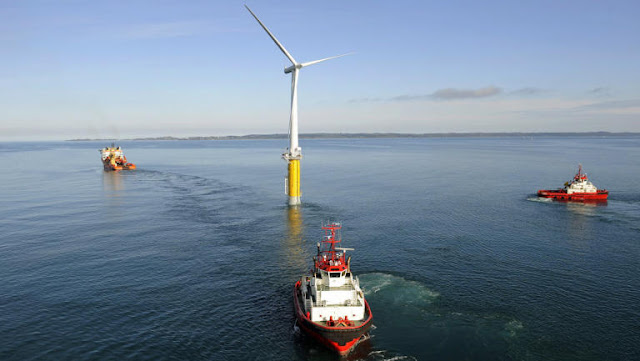 The project has been developed by Norwegian state energy company Statoil – although Ms Sturgeon stressed Scottish firms had been involved in the work.

Floating turbines have been installed on about 2.5 square miles (four sq km) of water in the North Sea, where the average wind speed is about 10 metres per second.

“Last month I set out our programme for government which made firm commitments to create a cleaner and greener Scotland, and the development of renewable energy is vital to achieve this.

“This pilot project underlines the potential of Scotland’s huge offshore wind resource and positions Scotland at the forefront of the global race to develop the next generation of offshore wind technologies.

“In addition to the green benefits of renewable energy, it also has a very significant contribution to make to our economy.

“I’m pleased Scottish suppliers have contributed to the Hywind project from the development through to the production phase and are still involved to investigate long-term potential for floating wind.

“This has been possible through the unique support which we have made available in Scotland.”

Environmental campaigners also welcomed the opening, with Gina Hanrahan, acting head of policy at WWF Scotland, stating: “With around a quarter of Europe’s offshore wind resource in Scotland, it’s great to see the world’s first floating wind farm inaugurated off our coast.

“Offshore wind is already an industrial success story across the UK, cutting emissions, creating jobs and dramatically driving down costs.

“By demonstrating the commercial viability of floating wind, Scotland can help to develop the industry in new frontiers and deeper waters.

“With this kind of innovation and investment, and continued political support, Scotland will continue to power towards our target of securing half of all our energy needs from renewable sources by 2030.”