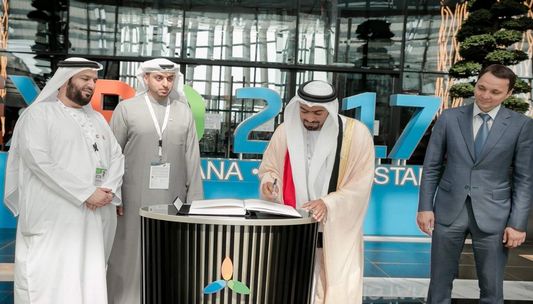 Through its participation at Expo 2017 Astana, the UAE is looking to implement the benefits and lessons as it gears up for the big ‘six-month’ event in 2020.

Under the theme Future Energy, the UAE pavilion displayed its key renewable energy projects to over 500,000 visitors through a series of features and activities that explored the role the country played in joining global efforts to address climate change.
The three-month event that will conclude on September 10 has been key to the UAE to discuss and explore new possibilities in the clean energy field as the country paves the way for hosting Expo 2020 Dubai in around three years – the first expo to be held in the Middle East, Africa and South Asia.

Suhail Mohamed Faraj Al Mazrouie, UAE Minister of Energy, said the event helped authorities shed light on the actions that will be taken in Expo 2020.
“Strategy of the UAE is bold for an oil exporting country that based its resources on the clean energy on the long run,” said Al Mazrouei. The strategy aims to increase usage efficiency by individuals and institutions by 40 per cent, and to increase clean-energy contributions by 50 per cent, accumulating Dh700 billion in savings, by 2050.

“Energy is the main component of building any economy. And today, renewable energy projects play a big role in our non-oil economy.”
He noted that the country has future investments of Dh600 billion as part of its energy strategy 2050. “With our new investment plan, we will save Dh700 billion to the country, compared to our current production pattern,” said Al Mazrouie, noting that the #UAE energy strategy is built on an economic and environmental dimension.

The country’s green solutions form an integral part of the economy and are key cornerstones of the comprehensive energy strategy, which has been established by the UAE’s leadership with the aim of diversifying resources and energy sources to build a strong sustainable knowledge-based economy.
Al Mazrouie said Expo Astana allowed the #UAE to shed light on its accomplishments in renewable energy, including projects and initiatives integral to the leadership’s development vision, which focuses on investing in its people.

Meanwhile, Mansour Al Mansouri, Director-General of the National #Media Council that builand organised the #UAE pavilion, said participations at Expo reflected the importance of clean energy, and the UAE’s strategy presented to find an integrated mix of renewable and clean nuclear energy that serves its future objectives.

The pavilion reflected achievements of the Dubai Electricity and Water Authority (Dewa), Masdar and other government entities, such as the Mohammed Bin Rashid Centre for Government Innovation.

Earlier, Dubai announced Dewa’s plans to develop the largest single-site solar park in the world, with a total planned capacity of 5,000 megawatts (MW), when completed in 2030. Once completed, the complex will cut carbon emissions by more than 6.5 million tonnes annually.
Masdar is the regional leader and an international player in renewable energy and sustainable urban development. Its portfolio of clean energy projects, including wind, solar PV and concentrated solar power (CSP), have a total generating capacity of more than 2.7 gigawatts.

About Expo Astana Under the theme ‘Future Energy,’ the exhibition received over five million visitors (50,000 visitors per day) from 100 countries and 10 international organisations. The exhibition covers an area of 113 hectares, of which 25 hectares are for 93 showrooms. #Kazakhstan is the fourth Asian country to have the honour of organising such an event after Japan, #SouthKorea and China.
The #UAE participated in key global expos, such as Expo 2008 Zargoza, Expo 2010 Shanghai, Expo 2012 Yeosu and Expo 2015 Milan. The country is preparing to host Expo 2020 in Dubai.

Sherouk Zakaria “Born and raised in UAE, Sherouk Zakaria is a Senior Correspondent at Khaleej Times. Joined since May 2016, she covers Dubai Municipality, Dubai Electricity and Water Authority (DEWA), special events and humanitarian issues. Her choice of journalism as a career stems from her passion of telling people’s stories and writing to inspire or make a difference. In her free time, she’s an occasional theater and film actress. Sherouk received her BA in Mass Communications from the American University in Sharjah in 2013. Before joining Khaleej Times, she was a senior lifestyle/entertainment editor for a magazine in Dubai.”