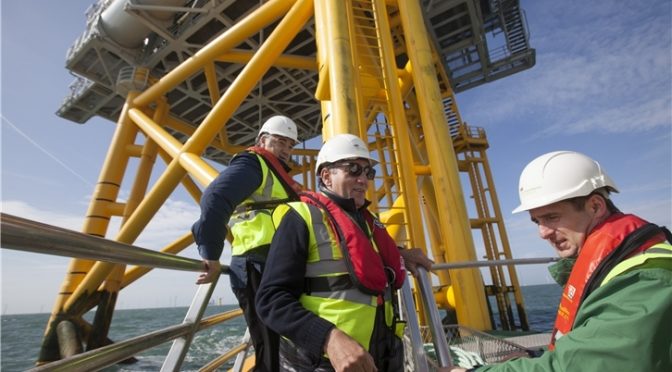 Avangrid Renewables, subsidiary of Avangrid Inc. (a company of the Iberdrola Group), and Vineyard Wind have announced today a strategic partnership to develop a large-scale offshore wind power project. Vineyard Wind will be built off the coast of Massachusetts in the USA.

Avangrid Renewables has acquired 50% of Vineyard Wind, the project’s promoter, from Copenhagen Infrastructure Partners (CIP). Work on the Vineyard wind farm will start in 2020. Its final capacity will be decided on the basis of technical studies and local characteristics.

This is a major strategic cooperation agreement. The knowledge about renewable energy in the USA held by Avangrid Renewables, combined with the experience in infrastructure funding of Copenhagen Infrastructure Partners and Iberdrola’s expertise in offshore wind power projects, makes up for a major competitive advantage. And this will allow Vineyard Wind to build the first offshore wind farm project in Massachusetts (and the USA).

In the summer of 2016, new regulations entered into force in Massachusetts which stipulate that power companies acquire the production of up to 1,600 megawatts (MW) from offshore wind farm facilities within 10 years. As a result, competition amongst promoters of technology is now fierce. As of this date, only three companies have acquired rights to build in the state’s maritime zone, including Vineyard Wind. Its concession is 15 miles south of Martha’s Vineyard island.

Iberdrola already holds a portfolio of major projects in this sector in Europe: the United Kingdom, Germany and France. Also, Avangrid Renewables (Iberdrola’s subsidiary) bought the rights to develop a project in the Kitty Hawk area, off the coast of North Carolina, during an auction in mid-March.

Copenhagen Infrastructure Partners provides finance and management services for ongoing offshore wind farm projects in Germany and Scotland, including the Veja Mate project (402 MW) in German waters and project Beatrice (588 MW) near the coast of Scotland. The Danish company handles more than 4 billion euros in assets and acquired Vineyard Wind in August 2016.

Now, experts from both companies will join the development team based in New Bedford, Massachusetts.

This deal consolidates Iberdrola’s role as a leading power utility in offshore wind power. This is the result of a perfectly designed and executed investment plan, which has given Iberdrola the experience to compete in a highly specialised sector. Iberdrola will now be able to apply its know-how to the emerging U.S. offshore wind power sector. The country’s east coast offers ideal conditions in terms of depth and wind resources.

Also, Iberdrola’s involvement in this project shows its strong commitment to implementing its investment plan in the USA. Its ample experience in the renewable sector and the long-term visibility provided by the Kitty Hawk (North Carolina) and Vineyard Wind (Massachusetts) projects are the perfect background for its continued growth in the USA with the introduction of the latest marine technologies.

Iberdrola has made strong investments in offshore wind power as one of the keys to its future. At the moment, the UK, Germany, France and the USA have been the chosen locations to carry out this activity.

In 2014, the company celebrated a remarkable achievement by becoming the first Spanish company to design and start up a wind farm, West of Duddon Sands (WoDS). Iberdrola developed this project through its British subsidiary, ScottishPower Renewables, in a consortium with the Danish company Dong. Together, the two companies invested more than 1.6 billion pounds. WoDS boasts 389 MW in capacity and, as such, is able to generate enough power to meet the energy needs of approximately 300,000 British households.

The offshore wind farm is located about 12 miles from Barrow-in-Furness in the north west coast of England. Since it first started operations, it has shown extraordinary performance both in terms of production and availability in hours. WoDS extends across approximately 26 square miles (mi2) and each of its turbines (supplied by the German company Siemens) has 3.6 MW capacity.

Iberdrola is now building the Wikinger offshore wind farm in the Baltic Sea’s German waters. This initiative will involve an investment of around 1.4 billion euros for 350 MW of capacity. It will meet the energy needs of more than 350,000 German households and stop almost 600,000 tons of CO2/year from being sent to the atmosphere. The wind farm is located at about 47 miles off the coast and will begin operations in October 2017.

Additionally, in 2018 Iberdrola will launch its third offshore project, the East Anglia One wind farm (714 MW), which will provide clean energy to over 500,000 English households. Involving an investment of 2.5 billion pounds, this is the largest Spanish project in the history of the renewable energy sector and it will become the largest offshore wind farm in the world when it opens in 2020. Siemens will supply 102 7MW turbines for the wind farm. The turbines will be built at Siemens’ new facilities in Hull, in the north of England.

Also, Iberdrola has asked the British government for this installation to be expanded to 2,000 MW. To this end, it has submitted a proposal for building the East Anglia Three wind farm with 1,200 MW of capacity.

In addition to these projects, there is also Sant Brieuc (496 MW) in French waters, with scheduled start-up in 2022. Specifically, the site is in the Bay of Saint-Brieuc, off the coast of Brittany in France, in the north of the country about 62 miles from the city of Rennes.

The wind farm will be equipped with 62 turbines with a capacity of 8 MW and located 12 miles offshore. These state-of-the-art wind turbines will have a Spanish hallmark, as they have been ordered from Adwen, a company belonging to Gamesa and specialising in the offshore wind power sector. The wind turbines will be spread over an area of 29 m², with the closest one to land being installed about 10 miles from the coast.

This facility, which is being developed by Iberdrola in collaboration with the company RES and Caisse des Dépôts, will be the company’s fourth offshore wind farm when it is commissioned.  The energy produced at this location is expected to meet the electricity needs of the equivalent of 850,000 inhabitants.

At an auction in mid-March, Iberdrola bought the rights to develop and build an offshore wind farm in the Kitty Hawk area, 24 nautical miles off the coast of North Carolina, with potential for installing up to 1,486 MW.

The company has 6,900 MW of generation capacity in the USA, mostly wind and solar energy. Iberdrola is currently building 1,800 MW of new onshore wind capacity which is scheduled to gradually start up until the end of 2019.

Listed in the New York stock market, Avangrid owns more than 31 billion dollars in assets. Its wind generation and distribution businesses can be found in 25 states; and it serves approximately 3.2 million customers in New York and New England.