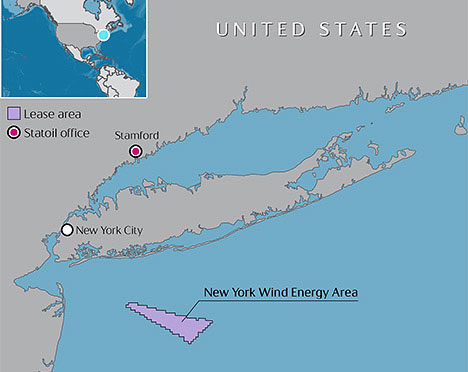 The U.S. Bureau of Ocean Energy Management (BOEM) recently announced that nearly 80,000 acres offshore New York will be offered in a December 15 commercial lease sale, with 14 qualified wind-energy developers expected to participate. There is six offshore wind projects valued at $6.7 billion in the Northeast region and six projects valued at $11 billion in the New England region. 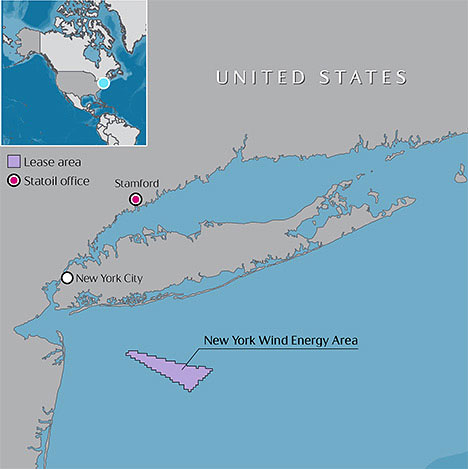 Statoil has been declared the provisional winner of the US government’s wind lease sale of 79,350 acres offshore New York.

Statoil will now have the opportunity to explore the potential development of an offshore wind farm to provide New York City and Long Island with a significant, long-term source of renewable electricity.

Statoil submitted a winning bid of USD 42,469,725 during the online offshore wind auction concluded today by the US Department of the Interior’s Bureau of Ocean Energy Management (BOEM).

“We are excited to have submitted the most competitive bid in a highly attractive project, Statoil’s first offshore wind lease in the United States. We now look forward to working with New York’s state agencies and contribute to New York meeting its future energy needs by applying our offshore experience and engineering expertise,” says Irene Rummelhoff, Statoil´s executive vice president for New Energy Solutions.

Statoil will next conduct studies to better understand the seabed conditions, the grid connection options and wind resources involved in the lease site.

“We will work closely with the New York State Energy Research and Development Authority (NYSERDA) on these studies and throughout the permitting process, and in connection with power offtake options,” says Rummelhoff.

The State of New York projects that offshore wind will be a significant part of the renewable energy generation needed to meet its Clean Energy Standard in 2030.

“The US is a key emerging market for offshore wind – both bottom-fixed and floating – with significant potential along both the east and west coasts. As today’s announcement shows, Statoil is well positioned to take part in what could be a significant build out of offshore wind in New York and other states over the next decade. This effort is in line with the company’s strategy to gradually complement our oil and gas portfolio with viable renewable energy and other low-carbon solutions,” says Rummelhoff.

Statoil is an integrated, technology-based international energy company primarily focused on upstream oil and gas operations. From a daily production of approximately 1.8 million barrels of oil equivalent (BOE), more than 270,000 BOE stem from the company’s onshore and offshore oil and gas fields in the US.