Siemens new offshore plant in Cuxhaven is quickly progressing. Only one year after the initial investment decision, construction at the building site is already beginning. Soil compaction and the preparation of the pile foundation, with 1,900 concrete piles, have already been completed. Construction of the actual building was officially started by Siemens with a groundbreaking ceremony attended by Parliamentary State Secretary Enak Ferlemann, who emphasized the importance of the project for Germany’s coastal economy and future energy infrastructure. “A new industry is developing at the German north and east coast which is not only beneficial for the labour market, but also for the energy transition. Cuxhaven is clearly on a solid course for the future.” 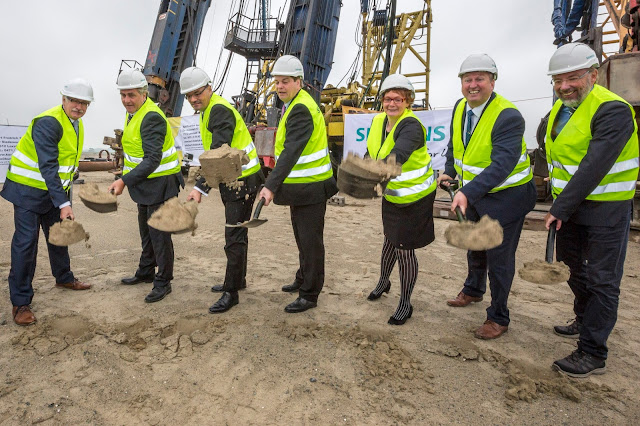 Günter Willbold, Head of Siemens Real Estate Germany, also praised the project. As Siemens’ first new factory in Germany in 20 years, the project clearly demonstrates “that Germany also has a future in production sites,” said Willbold. Daniela Behrens, Secretary of State in the Lower Saxony Ministry of Economics, called the project “the most important anchor for the German industrial offshore center in Cuxhaven. The offshore industry is key to the success of Germany’s energy transition.”

Sharing the groundbreaking spade with Behrens was Uwe Santjer, member of Lower Saxony’s parliament. Further cuts of the spade were done by the mayor of Cuxhaven, Ulrich Getsch and Hans-Joachim Stietzel, Head of the agency for the economic development of the City of Cuxhaven. On behalf of Siemens and the Wind Power and Renewables Division, CEO Markus Tacke introduced the new project manager Carsten-Sünnke Berendsen. As planned, he is taking on the project with the start of the building construction. Tacke thanked the predecessor of Berendsen, Thorsten Granzow, for his energetic efforts within the scope of planning and previous construction work.

During the coming weeks the concrete mixers will start working on the site covering an area of 170,000 square meters – a surface comparable to the size of 24 soccer fields. A poured concrete plate 320 meters long and more than 160 meters wide will be held in place by the 1,900 concrete piles and will form the base of the future production hall. Once production begins, the ground must withstand heavy loads of up to several hundred tons. Civil engineering works for the foundations of the production facility will start during the coming weeks. The completion of the enormous production hall, with heights of up to 30 meters, is scheduled for mid-2017. With its usable area of round about 55,000 square meters, the hall could provide parking for 15 large aircrafts. Besides the assembly hall, a two-story building with about 3,800 square meters usable area for offices and a canteen as well as a technological building and a gatehouse will also rise at the site.

Production of the seven megawatt direct drive offshore wind turbines will start in summer 2017, coinciding with the start of manufacturing of the 75-meter rotor blades at the new plant in Hull, UK. The two offshore manufacturing plants as well as the installation harbor ports will be connected by two specialized transport vessels and will deploy the innovative Siemens roll-on and roll-off logistics concept for loading. By using this approach, Siemens will avoid expensive crane operations for heavy components and increase workplace safety.