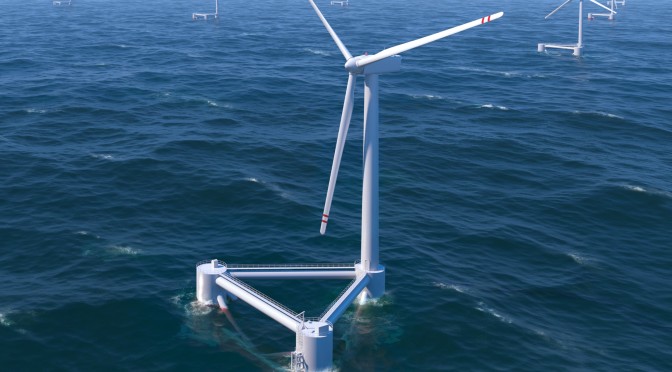 Closely designed with local players, this project will immediately create lasting economic activity. Based on innovative technology developed in France, the project represents a decisive step in the development of a highly promising renewable national marine energy resource and an encouraging vector for exports.

The installation will include 3 to 6 wind turbines of a minimum of 6 MW each. They will be joined with an integrated semi-submersible type floating foundation proposed by Eiffage Métal. The concept developed by Principle Power in its Aix-en-Provence engineering center represents the most promising technology on the market today and has been tested off the coast of Portugal since 2011. Eiffage Métal will manufacture and install the floats.

Armed with significant innovations, the project constitutes a decisive phase that anticipates the floating turbine sector’s industrialization in France and abroad. Indeed, the promising floating turbine technology offers the advantage of being installed in areas of high winds and in deep seas far from the coastline. The Mediterranean coastal areas of France are highly favorable to the development of this seaborne renewable energy. With this call for tenders, France joins Japan, Norway, Portugal and the United Kingdom, which have already embarked upon this technology.

With its launch, the project will immediately create lasting economic activity. To provide the main components of the project’s pre-commercial facilities, the joint venture will call upon a network of French businesses along the Mediterranean coast, particularly in the LanguedocRoussillon-Midi-Pyrénées region. The region’s port infrastructure will be used for assembly and maintenance operations and will provide the main components of the pre-commercial facilities.

The objective is for this pre-commercial phase to provide key experience to help ensure the success of future commercial developments, not only for the industrial field but also for the many associated stakeholders. The project has been developed and will continue to be developed in full cooperation with all the regional players, local governments and users of the sea, marine facilities, non-profits, and coastal residents. The partners share a commitment to design and put together an innovative, exemplary project from the industrial, socio-economic and environmental perspectives.
As a global energy player, ENGIE is strongly committed to renewable marine energies, whether offshore wind power (as concession holder in France of two 500 MW projects, at Dieppe-Le Tréport and Yeu-Noirmoutier, and of Belgium’s 450 MW Mermaid project) or in tidal currents (the Normandy Raz Blanchard pilot project). As producer of offshore natural gas, it possesses construction and operation expertise for installations on the high seas.

ENGIE develops its businesses (power, natural gas, energy services) around a model based on responsible growth to take on the major challenges of energy’s transition to a low-carbon economy: access to sustainable energy, climate-change mitigation and adaptation and the rational use of resources. The Group provides individuals, cities and businesses with highly efficient and innovative solutions largely based on its expertise in four key sectors: renewable energy, energy efficiency, liquefied natural gas and digital technology. ENGIE employs 154,950 people worldwide and achieved revenues of €69.9 billion in 2015. The Group is listed on the Paris and Brussels stock exchanges (ENGI) and is represented in the main international indices: CAC 40, BEL 20, DJ Euro Stoxx 50, Euronext 100, FTSE Eurotop 100, MSCI Europe, DJSI World, DJSI Europe and Euronext Vigeo (Eurozone 120, Europe 120 and France 20).

EDPR is a major player of Renewable Energies in France with 40 onshore wind parks in operations. EDPR is also a shareholder of the fix offshore projects of Noirmoutier/Yeu and Dieppe/Le Treport. EDPR is committed to support the French Energy Transition effort by means of its expertise, financial and Human resources.

Energias de Portugal, S.A. (“EDP”), the principal shareholder of EDPR, is a global energy company and a leader in value creation, innovation and sustainability. EDP is Portugal’s largest industrial group and the only Portuguese company to form part of the Dow Jones Sustainability Indexes (World and STOXX).

About Group Caisse des Dépôts
Caisse des Dépôts (caissedesdepots.fr) and its subsidiaries are a State-owned group, a long-term investor dedicated to serving the public interest and regional economic development. Its vocation was reaffirmed by the Law on Modernisation of the Economy of 4 August 2008.

Widely recognised for its expertise in managing its areas of competence, the Group focuses its efforts on four major areas of transition strategically vital to France’s long-term development: territorial, ecology and energy, digital and demographic.

Eiffage (eiffage.com) is one of Europe’s leading construction and concessions companies. The Group’s activities are organised on the basis of the following business lines: construction, real estate, civil engineering, metal, roads, energy and concessions. Thanks to the experience of more than 64,000 employees, Eiffage generated revenues of €13.9 billion in 2015, including 19% outside France.

With 50 years’ experience in offshore structures, Eiffage Métal is a major specialist in turnkey projects involving steel construction. Each day, our experts in France, Belgium, Germany and Spain use their engineering skills, project management expertise and production knowhow to provide customized solutions all over the world.