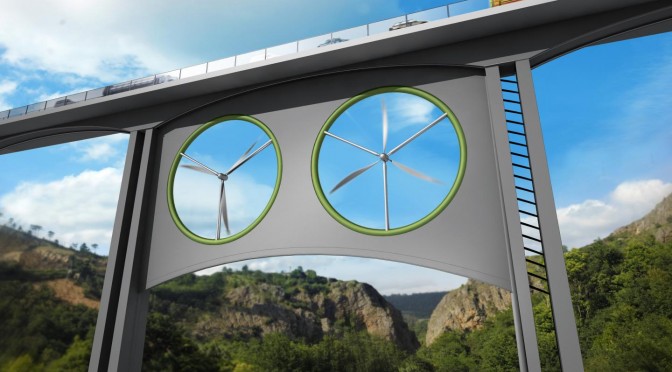 Wind turbines could be installed under some of the biggest bridges on the road network to produce electricity. So it is confirmed by calculations carried out by a European researchers team, that have taken a viaduct in the Canary Islands as a reference. This concept could be applied in heavily built-up territories or natural areas with new constructions limitations. 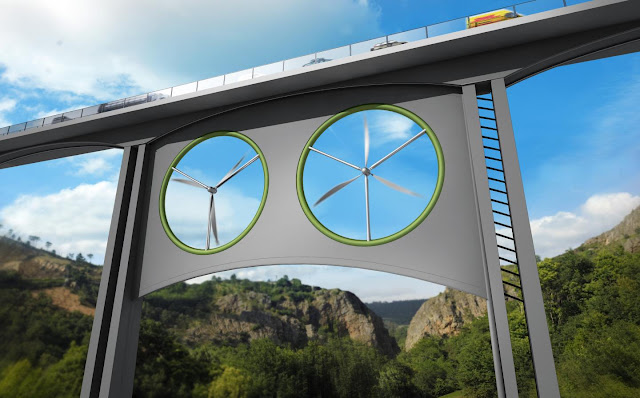 The Juncal Viaduct, in Gran Canaria, has served as a reference for Spanish and British researchers to verify that the wind blowing between the pillars on this kind of infrastructures can move wind turbines and produce energy.

The study is based in models and computer simulations, which were carried out by researcher Oscar Soto and his colleagues in Kingston University (London). Researchers have presented the wind turbines as porous discs in order to evaluate the air resistance and test different kind of configurations.

“As natural, the more surface is swiped by the rotor, the more power can be produced; however, it was seen that in small turbines the power rate per square meter is higher”, explains Soto, who considers that the configurations with two identical turbines would be the most viable to be installed in viaducts.

If only produced power was evaluated, the best solutions would be the installation of two wind turbines with different sizes – in order to embrace the maximum available space-, or even a matrix of 24 small turbines – due to their power production per surface unit and low weight-, but concerning to viability, the best option is the one which includes two medium sized wind turbines.

Results confirm that each viaduct presents specific energy possibilities and wind potential. In the Juncal Viaduct case, the evaluated power would be about 0,25 MW per wind turbine. So, with two turbines, the total power output would be 0,5 MW, which is classified in the medium-power range.

“This would be the equivalent to 450-500 homes average consumption”, says Soto, who adds: “This kind of installation would avoid the emission of 140 tons of CO2 per year, an amount that represents the depuration effect of about 7.200 trees”.

This research has been promoted by the Canarian company ZECSA. Researchers from Vigo University have taken part to analyze the electrical connections needed to develop the project, along with other researchers from Las Palmas de Gran Canaria University, who were in charge of the integration in the scope of renewable energies “.

In fact, the study has been published in the Renewable and Sustainable Energy Reviews and it is framed in PAINPER, a public infrastructures exploitation plan to boost the use of renewable energies.

“PAINPER is an initiative which emerges from the difficulties seen in the implantation of this kind of energies in heavily built-up territories, as well as protected areas with low available space for new installations”, says Aday C. Martín, manager at ZECSA, who considers that renewable energy produced in wind turbines under viaducts could be added to energy from other wind, solar, geothermal and biomass installations.