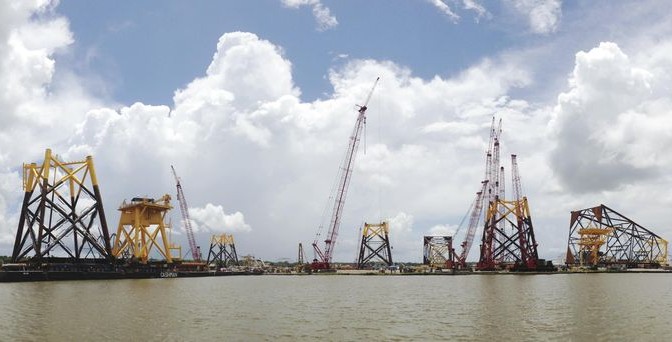 Five massive structures that will be attached to the ocean floor for the nation’s first offshore wind farm are coming to Rhode Island.

In this June 27, 2015 photo provided by Deepwater Wind, contractors at Gulf Island Fabrication, in Houma, La., work on structural components for a wind power farm set for installation offshore from Block Island, R.I., in late July. Two components have been loaded onto a barge, left. The Block Island Wind Farm is planned as a 5-turbine, 30-megawatt power generation facility. Scott Kingsley/Deepwater Wind.

Deepwater Wind is building a five-turbine wind farm off Block Island, with the ability to power 17,000 homes as early as next year.

The steel foundations were built in Houma, Louisiana. They’re being shipped north on three barges, with each structure in two large pieces.

The first barge is expected to leave Friday and arrive at the site by mid-July, depending on weather, said Deepwater Wind CEO Jeffrey Grybowski. The foundations will be installed by mid-September, he added.

Grybowski said he’s anxious to see the first one touch the seabed- or, as it’s known in the industry, the “first steel in the water” for offshore wind in the United States.

“That is what has eluded our industry in the U.S. for so long and it’s why we’re so focused on getting to that moment, and so excited that we are only a few weeks away,” he said. “We are counting the days.”

Cape Wind received approval to build the nation’s first offshore wind farm, a 130-turbine project off of Cape Cod, Massachusetts, five years ago, after more than eight years of lawsuits and government reviews. But that project stalled as the company faced a series of legal challenges brought by project opponents, largely funded by billionaire businessman William Koch.

Developers and industry experts are hoping Deepwater Wind’s wind farm will pave the way for other projects.

Deepwater Wind also plans to build a wind farm of at least 200 turbines between Block Island and Martha’s Vineyard.

The foundations for the Rhode Island project stand about 170 feet tall and weigh 1,500 tons. They will rise about 70 feet above the waterline, about three miles off southeastern Block Island. Some of the components were built in Rhode Island.

Work will stop over the winter and resume in the spring with the installation of the undersea cables, followed by the turbines themselves, Grybowski said.

The wind farm should be operational in the third quarter of 2016, he added.

“It is a harbinger of what may occur here in the United States as we move from this small project to larger projects over time,” Grybowski said. “It is very important that we succeed.”