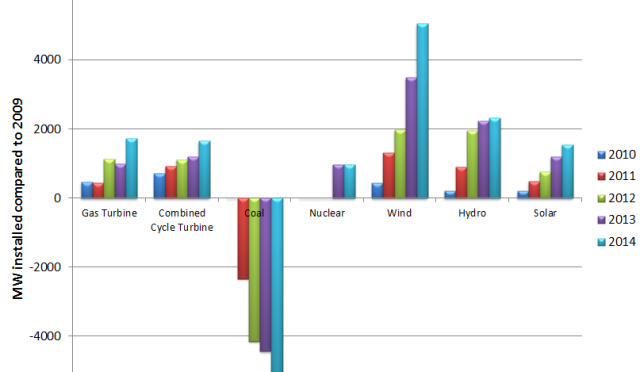 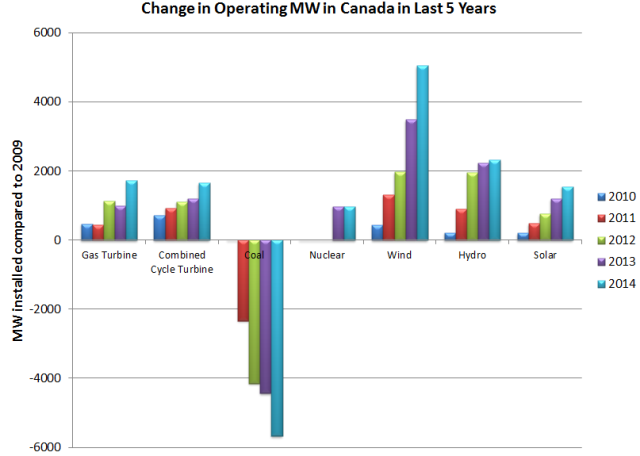 In Canada, for example, there has been more new wind energy capacity installed over the last five years (5,690 MW) than any other form of electricity generation – more than natural gas, hydro, nuclear or solar. Indeed, wind energy represents 38 per cent of all new electric generation capacity installed from these sources in Canada in this period – and Canada’s coal-fired generating capacity has actually fallen at the same time.

These trends have been in place even longer in the European Union. According to Wind Power in Europe, wind energy was not only the leading source of new electricity generation in 2014 (representing 44 per cent of new installed capacity), it has been the largest source of new electricity generating capacity in Europe over the last 15 years. Between 2000-2014, there were 117 GW of new wind energy capacity installed in Europe, 101 GW of new natural gas fired capacity and 88 GW of new solar capacity. Over that same time period, nuclear generating capacity in Europe fell by 13 GW and coal-fired generation fell by 25 GW.

We are now at the leading edge of a fundamental transformation of global electricity systems that is creating systems that are more diverse, decentralized and low carbon. As the data shows, wind energy has been, and will continue to be, a leader in that transformation because of its cost-competitiveness, environmental attributes, scalability and local economic benefits.