High-level officials from around the world gathered in Masdar City today to celebrate the official inauguration of the permanent headquarters of the International Renewable Energy Agency (IRENA). The event celebrated the history and achievements of the Agency since its foundation in 2009, while recognizing the move as the latest milestone in the global clean energy movement. 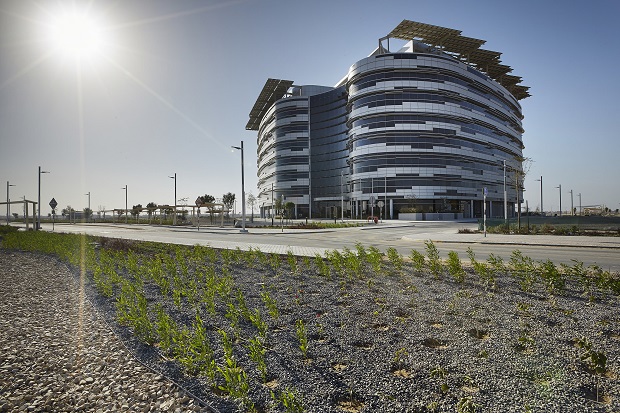 “We are delighted to finally be home in our new global headquarters, an extraordinary building that is a paragon of sustainability throughout the region,” said IRENA Director-General Adnan Z. Amin. “Its advantageous location in Masdar City, and in Abu Dhabi, positions the headquarters as a nerve centre for renewable energy action and knowledge for the future.”

The IRENA headquarters building is the first in the UAE to achieve a four-pearl Estidama construction rating – a UAE-certification system stressing energy, water and carbon efficiency. Located at the geographic centre of sustainable Masdar City, the 32,000 square metre complex consists of three interconnected buildings, which work together to conserve energy and water, and create shared space.

“The inauguration of the IRENA headquarters today in Masdar City marks an important milestone on the UAE’s journey, which began with our first proposal to host the organisation seven years ago,” said H.H. Sheikh Abdullah bin Zayed Al Nahyan, UAE minister of foreign affairs. “Hosting IRENA in Abu Dhabi is a reflection of the UAE’s commitment to expanding access to sustainable, clean energy both domestically and internationally. We look forward to partnering closely with IRENA and countries around the world to support the further development of renewable energy and clean technologies.”

UAE Minister of State and Chairman of Masdar H.E. Dr. Sultan Ahmed Al Jaber said, “This is a proud moment for Masdar as we welcome IRENA, the first intergovernmental organisation headquartered in the Middle East, to its new home in Masdar City. This ecosystem of innovation is the perfect setting for IRENA’s mission to advance the deployment of renewable energy worldwide. As the world, more than ever before, seeks access to safe, secure and clean energy, the inauguration of the IRENA headquarters building is a testament to Masdar City’s leadership as a growing hub for the research and development of renewable energy technologies,” continued H.E. Dr. Al Jaber.

The new IRENA headquarters enables IRENA to lead by example in operating from a building that is a symbol of sustainable design and development.

“This is an exciting time to be working in renewable energy,” said Mr. Amin. “Renewables have reached an age of maturity where costs plummet, investment climbs, and world leaders recognize the necessity of scaling up deployment. IRENA’s new headquarters are a symbol of the world’s turn towards renewables.”

Due to passive design and smart energy management systems, the building demands 42% less energy than global energy-efficiency standards.
Solar water heaters supply 75% of the building’s hot water demand.
The building demands approximately 50% less water than similar conventional office buildings in Abu Dhabi.
The 1,000 m2 PV rooftop system will produce 305,000 kWh of electricity annually. In addition, the solar hot water system will be equivalent to 27,850 kWh. Altogether, the renewable energy systems output of the building will cover more than 10% of the building energy demand.
The building is twice as airtight as Estidama requires, reducing the site’s overall energy consumption.
The building’s air conditioning system recovers 75% of the energy released as exhaust air, and then harnesses it to cool incoming fresh air.