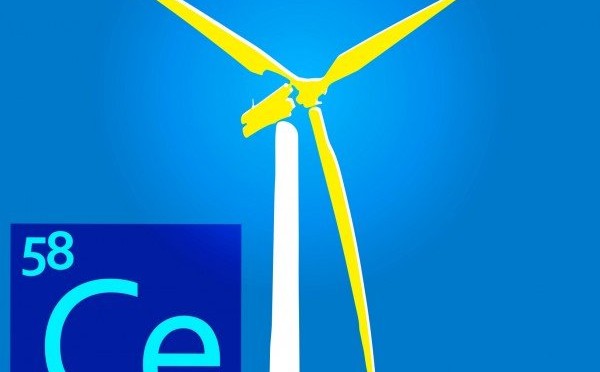 Cerium is a widely available and inexpensive rare-earth metal. Scientists have used it to create a high-performance magnet that’s similar in performance to traditional dysprosium-containing magnets and could make wind turbines less expensive to manufacture.

Karl A. Gschneidner and fellow scientists at the U.S. Department of Energy’s Ames Laboratory have created a new magnetic alloy that is an alternative to traditional rare-earth permanent magnets.

The new alloy — a potential replacement for high-performance permanent magnets found in automobile engines and wind turbines–eliminates the use of one of the scarcest and costliest rare earth elements, dysprosium, and instead uses cerium, the most abundant rare earth.

The result, an alloy of neodymium, iron and boron co-doped with cerium and cobalt, is a less expensive material with properties that are competitive with traditional sintered magnets containing dysprosium.

“This is quite exciting result; we found that this material works better than anything out there at temperatures above 150° C,” said Gschneidner. “It’s an important consideration for high-temperature applications.”

Previous attempts to use cerium in rare-earth magnets failed because it reduces the Curie temperature — the temperature above which an alloy loses its permanent magnet properties. But the research team discovered that co-doping with cobalt allowed them to substitute cerium for dysprosium without losing desired magnetic properties.

Finding a comparable substitute material is key to reducing manufacturing reliance on dysprosium; the current demand for it far outpaces mining and recycling sources for it.

The research was supported by the U.S. Department of Energy’s ARPA-E REACT program (Advanced Research Projects Agency-Energy-Rare Earth Alternatives in Critical Technologies) which develops cost-effective alternatives to rare earths, the naturally occurring minerals with unique magnetic properties that are used in electric vehicle (EV) motors, and wind generators. The REACT projects identify low-cost and abundant replacement materials for rare earths while encouraging existing technologies to use them more efficiently.

The above story is based on materials provided by Ames Laboratory.