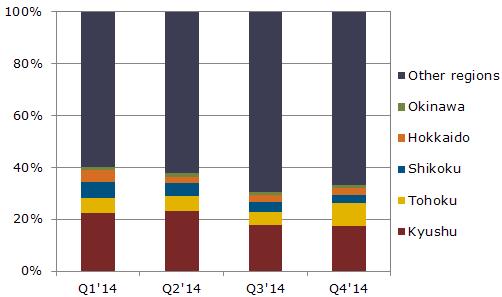 According to the latest Solarbuzz Asia Pacific Major PV Markets Quarterly report, annual APAC PV demand in 2014 is forecast to grow 19% Y/Y, driven mainly by a year-end installation rush in China, as well as strong growth in Japan.

Overall, APAC PV demand is forecast to continue growing and to maintain shares in global PV market of more than 50% in 2015, said Solarbuzz, now part of IHS (NYSE: IHS).

China contributed the most to demand in the APAC PV market in Q4’14, although China’s PV demand was weaker than expected in the first three quarters. Ground-mount projects still dominate the Chinese market, as the building-mount segment supported by distributed PV subsidies slowly builds up.

Solar PV Demand Shares by Region in Japan in 2014

“Although the National Energy Administration recently announced that only 3.79 gigawatt PV systems were connected to the grid, many projects began construction during the first three quarters of 2014,” said Isabella Ni, China analyst for Solarbuzz. “With a year-end surge of installations, even after three weak quarters, full-year PV demand in China will exceed its 2013 level.”

PV demand in Japan during 2014 is forecast to grow 46% Y/Y in 2014, due to favorable government incentives, according to the Solarbuzz report. Project pipelines also provided strong support to the Japanese PV market, reaching more than 56 GW through the end of Q3’14.

“Since the end of Q3’14, five regional utilities in Japan announced suspension of replies for non-residential projects; however, these issues will not significantly impact PV demand in Japan through 2015,” said Holly Hu, Japan and India analyst at Solarbuzz. Total demand within the five utility regions accounts for about 35% of Japan’s demand in 2014. PV projects that have already received approval for grid connection are not affected.

come the most exciting PV market in APAC region during the next several years,” Hu said. “Since the new Prime Minister Narendra Modii came on board, the government of India has announced many ambitious solar PV development plans.”

In Australia, the new Renewable Energy Target (RET) is still under negotiation, while residential installations are driving PV demand in Q4’14 to their highest level. Meanwhile, the ground-mount segment is also increasing, driven by construction of three large-scale, ground-mount projects. “The new China-Australia Free Trade Agreement, which potentially may resolve the trade dispute with China on PV panels, is also good news for the Australia PV market,” Ni said.

Thailand and the emerging APAC PV markets are also showing growth potential in the coming years. The ground-mount segment is forecast to increase its market share in emerging markets, as large projects are currently planned in the Philippines, Pakistan, and other countries.