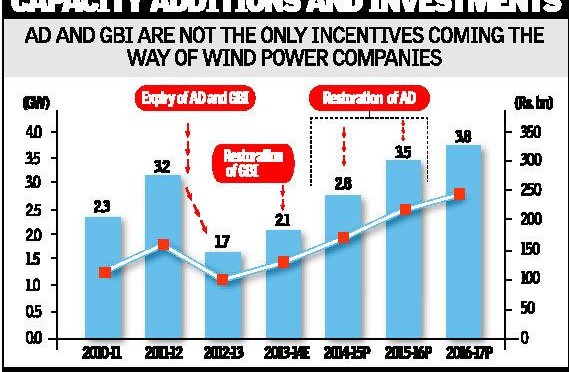 The restoration of benefits such as accelerated depreciation (AD) and generation-based incentive (GBI) is expected to invigorate the domestic wind power sector.

Crisil Research estimates that 10,000 MW of capacity will be added during 2015-18, entailing investments of Rs.65,000 crore compared with 7,000 MW over the previous three years.

GBI and AD (which expired in March, 2012) enable a quantum improvement in the economics of power projects, so it is understandable why capacity additions will go up with their restoration. Crisil Research estimates suggest that projects availing of AD (80 per cent depreciation allowed in the first year of operations) are economically viable at only Rs.3.80 a unit. In comparison, States such as Maharashtra, Rajasthan, Andhra Pradesh and Madhya Pradesh offer preferential tariffs ranging from Rs.3.90 to Rs.5.90 a unit, which make wind power attractive for developers in these States.

That is not all. In States such as Maharashtra, Karnataka, Tamil Nadu, Andhra Pradesh and West Bengal, where industrial tariffs are high in the range of Rs.7 to Rs.7.50 a unit, wind power is an attractive option since generation costs are significantly lower, particularly in view of the restoration of AD.

Likewise, GBI (Rs.0.50 a unit for a period not less than four years and maximum of ten years) is also estimated to reduce tariff required to earn equity IRR of 16 per cent to about Rs.4.50-4.70 a unit from Rs.5 a unit, depending on the plant load factor (PLF).

AD and GBI are not the only incentives coming the way of wind power companies. The Central Government provides a ten-year tax holiday (under Section 80IA), funding through the Indian Renewable Energy Development Agency (IREDA) at favourable interest rates (~100 basis points lower than bank finance), concessional custom duty and excise duty exemption on wind turbine components. The government also proposes to set up a National Wind Energy Mission to facilitate and promote capacity additions in the sector.

During 2015-18, capacity additions will be driven by Maharashtra, Madhya Pradesh and Andhra Pradesh, which offer attractive preferential tariffs that are determined by the respective State electricity regulatory commissions based on capital costs and PLF. Moreover, the power distribution companies (discoms) in these States are relatively stronger financially, which ensures timely payments.

By contrast, capacity additions in Tamil Nadu are expected to decline due to significant evacuation issues and a poor track record of timely payments.

In the past, the sector was largely driven by the OEM (original equipment manufacturer) model. OEMs such as Suzlon, Gamesa, Vestas, Regen Powertech and Inox Wind provide end-to-end solutions, including wind and site studies, land procurement, installation of turbines and operation and maintenance services. The OEM model was prevalent as SMEs, which have limited experience in executing power projects, dominated capacity additions to reduce tax outgo by availing themselves of accelerated depreciation. But, over the last two years, we have witnessed a gradual shift in project execution due to the entry of IPPs (independent power producers).

However, in future, Crisil Research expects both models to co-exist. The OEM model will be driven by restoration of AD coupled with the fact that OEMs have acquired sites with good wind potential. The IPP route will be led by the focus of players such as Tata Power, China Light & Power and NTPC on wind power, particularly due to issues such as limited fuel availability, delay in clearances and the like in the conventional power space.

Even though the sector’s prospects appear to be bright, there are certain challenges ahead. Notable among these are lack of enforcement of renewable purchase obligation (RPO), the weak financial health of State discoms, and inadequate evacuation infrastructure.

Some States such as Tamil Nadu, Kerala and West Bengal have revised their RPO targets downwards in the past. Also, States such as Maharashtra, Haryana and Chhattisgarh have been allowed to carry forward their RPO obligations. The poor compliance of States is reflected in the sharp increase in unsold renewable energy certificates (REC) to 10.1 million as on September 30, 2014, from 3.7 million against the previous year. The REC is a mechanism available for States with lower renewable energy potential to meet their RPOs through purchase of these certificates on the power exchange. Clearly, if States reduce obligations or are unable to meet them, investments in the wind power market could be affected.

The poor financial health of State discoms too remains a major concern, as it hinders their ability to offtake wind power at nearly Rs.5 a unit. Some States also do not have sufficient transmission infrastructure to evacuate power within the State. Land availability, delays in land acquisition and obtaining clearances are difficult in States such as Karnataka and Maharashtra, which can also slow down project execution, leading to time and cost over-runs. Overcoming these challenges is important if the full potential of the sector is to be realised.