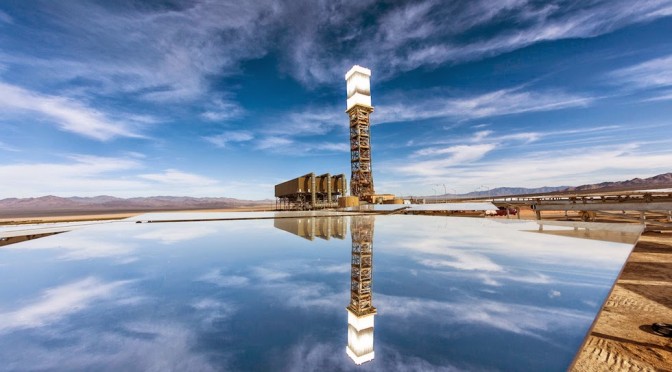 Ivanpah is the largest concentrated solar power (CSP) plant in the world. Unlike traditional solar photovoltaic panels — which convert sunlight directly into electricity — concentrating solar power technology uses sunlight to heat water or another liquid, ultimately creating steam that can be used to turn turbines and generate electricity. Concentrated solar power has a major advantage over wind energy and photovoltaic, particularly in California: the ability to store energy. As the state races to adopt renewable energy, one of its biggest challenges will be intermittency — the fact that most solar energy and wind power plants only produce power when the sun is shining, or when the wind is blowing. 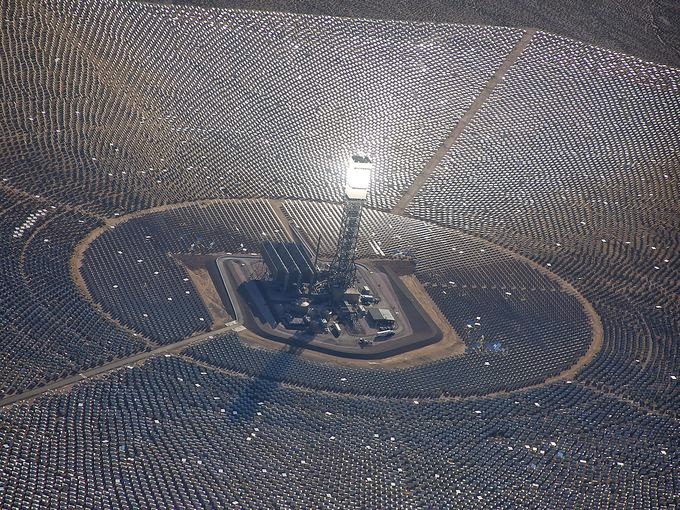 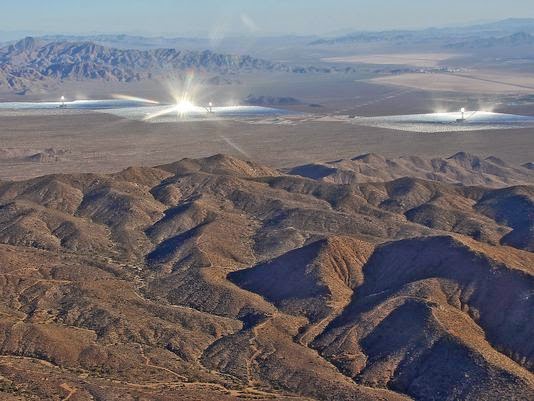 Thousands of heliostats focus solar energy on three boilers at the top of solar power towers at the world’s largest solar thermal power station in the Mojave Desert, Tuesday, October 21, 2014.(Photo: Jay Calderon/The Desert Sun)
A global perspective
While new concentrated solar power development is coming to a standstill in the United States, it continues to thrive overseas. Abengoa, BrightSource and SolarReserve are actively pursuing projects in China, South Africa and the Middle East, according to executives from companies.
Of the 23 concentrated solar power projects with storage that had come online by the end of last year, just one was in the United States, according to a report from the BrightSource-backed Concentrating Solar Power Alliance. Twenty-one of those projects were in Spain, which until last year offered a financial incentive specifically for concentrated solar.
“What the grid operator in Spain has found is that the (concentrated solar power) with storage was the most flexible and valuable resource they had on the system,” White said.
In the developing world, solar executives say, concentrated solar power development is being driven by huge increases in electricity demand — coupled, in some countries, with a desire to ramp up renewable energy.
“In a lot of the international markets, they don’t really have a whole lot of choice — they need power on the grid, they need it reliably, and not just during the sunlight hours,” Smith said.
The United States, Smith added, has less of an imperative to adopt concentrated solar power because of its vast natural gas reserves, which have been made much more accessible by hydraulic fracturing over the past decade. It’s a double-edged sword — those natural gas reserves have helped the country transition to intermittent renewables, but in the long run, they could make abandoning fossil fuels more difficult.
Many countries “don’t have access to natural gas, they don’t have access to the capital to build nuclear and other things,” Smith said. “They’re really looking at capacity to meet their base loads, and that’s why storage is important.”
http://www.helioscsp.com/noticia.php?id_not=2743
termosolar, Concentrated Solar Power, Concentrating Solar Power, CSP, Concentrated Solar Thermal Power, avian, solar power, israel, Ivanpah, Genesis, Crescent Dunes, Solana, Concentrating Solar Power Alliance, solar energy, intermittent, Palen, avian, BrightSource Energy, SolarReserve, Abengoa, California, U.S., energy storage,