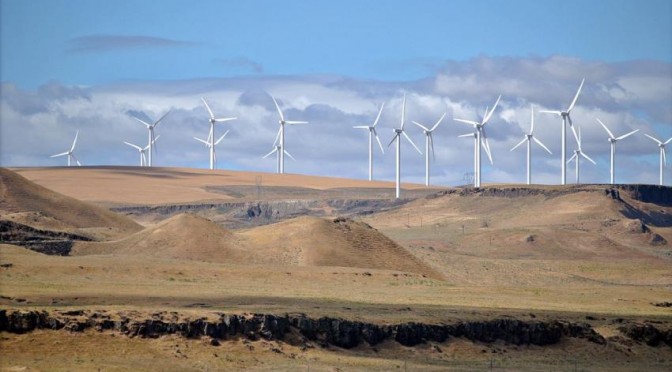 MidAmerican Energy Company announced plans Oct. 10 to develop one new wind farm site in Adams County and expand a second site in O’Brien County in 2015 – an additional investment of up to $280 million for the nation’s leader in ownership of wind-powered generation among rate-regulated utilities.

If approved, the company’s proposed wind project would result in installation of up to 67 wind turbines. The project, scheduled for completion by the end of 2015, would add up to 162 megawatts of new wind generation capacity in Iowa.

Bill Fehrman, president and CEO of MidAmerican Energy, said the new project reflects the company’s commitment to the development of renewable energy. Using wind as the fuel source to generate energy for this project helps the company reduce its fuel costs, which in turn helps stabilize electric rates for customers. Energy costs passed through to customers are projected to be reduced by approximately $93 million over 10 years.

“MidAmerican Energy’s commitment to wind generation garners long-lasting benefits and makes Iowa a competitive economic force not only in the United States but also in the world,” Branstad said. “Iowa has attracted major tech companies, such as Google, Microsoft and Facebook, because of our low energy prices and commitment to renewable energy. MidAmerican Energy’s newest wind project will help the state meet the demand for renewable energy that is attracting major companies and high-quality jobs to Iowa.”

“MidAmerican Energy’s investment in additional wind generation provides significant benefits to all citizens of Iowa,” Lieutenant Gov. Reynolds said. “Wind is now the No. 1 source of new electric generating capacity in the country, and Iowa derives a greater percentage of its electricity from wind than any other state. By taking advantage of the abundant wind resources we have here in the state, MidAmerican Energy is delivering a sustainable energy solution that will play an increasingly important role in powering Iowa’s future.”

“With this proposed expansion, beginning in 2016, MidAmerican Energy’s wind resources are expected to produce an amount of energy equivalent to approximately 50 percent of the retail energy customers are expected to need,” Fehrman said. “We’re extremely proud of how far we’ve come as a state, and as a company, since the installation of our first wind turbines a decade ago. These wind projects help stabilize rates in the long term for our customers, foster economic development in Iowa communities, and demonstrate MidAmerican Energy’s commitment to the environment.”

MidAmerican Energy is working with county officials and landowners to secure development and interconnection rights for the project sites. These sites are expected to provide more than $40 million in additional property tax revenues over the next 30 years, along with annual landowner payments. Blades for the new turbines will be manufactured at the Siemens facility in Fort Madison. The next step in the development process is for MidAmerican Energy to file for approval of its wind expansion project with the Iowa Utilities Board. If the IUB approves the project, construction could start in the summer of 2015, with completion by the end of that year.

Coupled with projects currently underway in Grundy, Madison, O’Brien and Webster counties, MidAmerican Energy will have approximately 3,500 megawatts of wind generation capability in Iowa by year-end 2015 – enough capability to provide energy for the equivalent of approximately 1.05 million average Iowa households. With the completion of this newest project, MidAmerican Energy will have invested more than $6 billion for wind generation development in Iowa, making wind approximately 40 percent of its electric generator nameplate capacity.