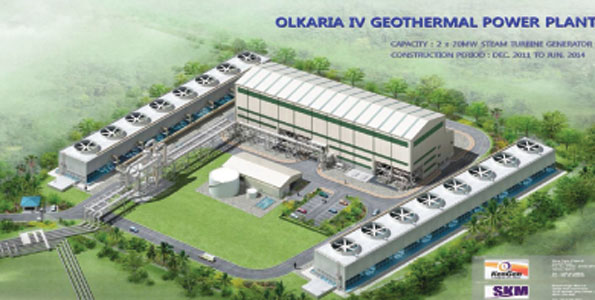 Thirty five years ago, former President Daniel arap Moi’s government decided to venture into an ambitious plan to tap steam in the geothermal-rich area and convert it into electricity which was scarce in those days.

“There were success stories from villagers who were known to tap steam and convert it into water for washing and other home uses. The government thought that if they did it on large scale this could change the country’s future,” said Geoffrey Muchemi, the geothermal director.

In June 1981, they approached the World Bank and the United Nations Development Project for a grant for the project.

Yet, the company had to be careful not to interfere with the nomadic lifestyle of the people who lived in the area or the wild animals that called the park home.

To address the animal issue, the company came up with overhead loops for the pipes that carried out the steam; hence wild animals could roam freely.

They also decided to incorporate the Maasai community in their activities and adopted them in their programmes.

The Maasai were the first settlers in the area and the view of their manyattas brings a beautiful addition to the huge pipes that traverse the facility.

Once in a while during a drive in the facility one bumps into a herd of cattle from the community, who view cattle as a prized possession.

Young beaded girls who often portray the rich culture of the people are a common sight when one visits Olkaria.

“We were among the first settlers here. We even have a cultural centre to showcase the beauty of the Maasai inside the park and it attracts a lot of visitors,” said Maenga Ole Kisotu, the Chair of the Maasai community.

The location of Olkaria power station, inside the park, has often left visitors torn between watching animals and learning about geothermal production.

There are various projects at Olkaria, a product of the Kenya Electricity Generating Company (KenGen).

They include Olkaria I, Olkaria II, Olkaria I unit IV and V and Olkaria IV. The total generation from these power plants is 360MW.

Another 140MW is expected to be connected to the national grid by end of October 2014.

It was officially commissioned by President Uhuru Kenyatta on Friday October 17, 2014.

Olkaria 1, which has a capacity of 45 Megawatts, was the first project.

It was started in June 1981 and following its success saw the birth of Olkaria II which produces 105 MW.

The projects were financed by the World Bank, the United Nations Development Programme (UNDP) and the government of Kenya.

“Over time it has grown to be one of the leading supplies of electricity to the national grid, which in turn has seen Kenya as country produce surplus electricity.

“We are producing at least 2000 MW and yet the current demand is 1500. This has in turn helped to reduce the cost of electricity drastically.

“We are expecting at least a 30 per cent reduction in electricity cost following more geothermal exploration,” said Energy Cabinet Secretary David Chirchir during a tour of the facility.

Mr Chirchir added that the commissioning of the Olkaria IV will help introduce a flat rate of 4 US cents per unit.

“The commissioning of Olkaria IV will see the company generate more fuel at a cheaper cost,” he added.

The recent introduction of mobile wellheads has also been a great attraction to visitors.

The four wellhead units generate a total of 32.7MW.

They are placed on top of a geothermal rich area to expedite early generation of electricity.

Fifteen mobile wellheads were introduced in early 2014. They are also cheaper to operate and can be moved once exploration in a particular area is complete.

KenGen CEO Albert Mugo said the adaption of clean and renewable energy from the wellheads would benefit Kenya more as it lays more emphasis on modular and mobile power plants.

“We are exploring more flexibility in the generation of electricity. The wellheads are simply placed on top of geothermal wells the of a geothermal rich part and produce the energy after which they can moved to a different place,” he added

The wellheads, according to Olkaria geothermal Power Plant Manager Geoffrey Muchemi, can deliver power plants at a lower cost-per-megawatt (MW) than standard geothermal projects and at a faster rate.

“The new concept we are adopting has enabled us to generate more power to be produced from each individual well. This also reduces well redundancy and prevents well failures,” he added.

The wellheads, a first of its kind, is part of the company’s strategy to increase the amount of electricity produced for national consumption as well as to cut fuel costs from diesel wellheads.

Mr Muchemi said that the company did not have to undergo heavy expenses in building a permanent well which is abandoned after the geothermal steam in the area is fully exhausted.

The direct use spa bath, which is currently the largest in Africa and the second biggest in the world, is also one of the huge attractions.