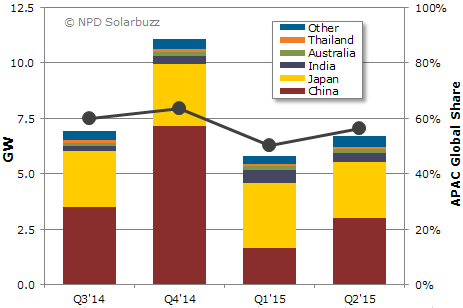 While solar power has been growing across the APAC region, 95% of the demand in 2014 is coming from the top five countries. According to Ray Lian, senior analyst at NPD Solarbuzz, “China, Japan, India, Australia, and Thailand are forecast to rank in the top 10 global PV markets. China and Japan are dominating demand, with about half of all new PV capacity added this year.”

Seasonally strong demand from China is responsible for the majority of share gains in the APAC region during 2H’14. About 80% of PV demand in China is forecast to come from ground-mounted projects; however, the commercial rooftop market segment is experiencing slower growth than the Chinese government had hoped for. The National Energy Administration has recently announced new policies to support development of distributed generation PV projects, especially rooftop projects.

Within Japan, the pipeline of approved PV projects stands at 59 GW; however, actual demand from Japan is forecast to exceed 5 GW in 2H’14, due to a range of factors including qualified land resources, financing, and grid connectivity. “Falling PV system costs, together with high feed-in tariff rates, continue to provide attractive PV project economics within the Japanese PV market,” according to Holly Hu, analyst at NPD Solarbuzz. “While the Japanese government reviews the progress of the approved project pipeline, PV installations will continue to accelerate quickly, during the next few quarters.”

India, Australia, and Thailand are experiencing greater challenges. “The Indian government recently opened the bidding process for PV projects, under the country’s National Solar Mission Phase II Batch II; however, policy uncertainties have delayed solar PV demand in India for the past six months,” Hu said. “On a positive note, the Indian government recently avoided potential problems that may have arisen if anti-dumping duties had been imposed on imported Chinese silicon-based PV modules.”

Annual demand from Australia and Thailand is forecast to decline in 2014, due in part to pending renewable-energy policy changes and investor uncertainty; however, a year-end boost is expected in the large-scale ground-mount segment in Australia. Ground-mounted projects at Nyngan and Broken Hill in New South Wales, developed by AGL/First Solar, are expected to have a total nominal capacity of 155 megawatts of alternating current (MWAC).

Outside the major solar PV markets in the APAC region, more countries in Southeast Asia are starting to develop solar PV capabilities, including the Philippines and Indonesia. In Pakistan, the first 100 MW phase of the 1 GW Quaid-e-Azam solar projects has also started installation.