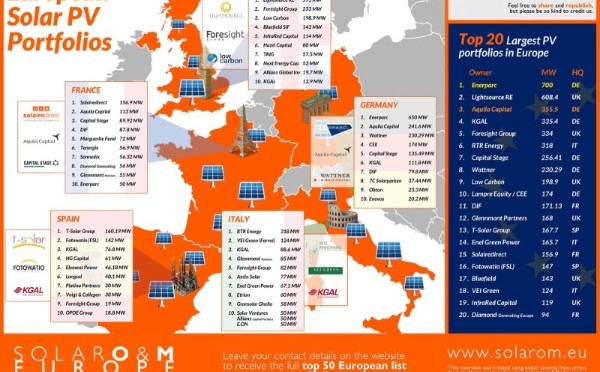 Europe’s solar portfolios are still divided over a large number of different owners, but this is a changing landscape. In conjunction with our conference Solar O&M Europe, we have started to create an overview and to map developments in this field, resulting in the attached infographic, which we would like to share with you.

Europe has been leading the path for solar worldwide and is the most mature regional market, with a current installed capacity of over 80 GW (EPIA, Global Market Outlook 2014-2018). Large (institutional) investors are increasingly investing in PV assets and new financing instruments such as Yieldcos successfully provide new sources of capital. All forecasts predict growth which, although not enormous, remains stable for PV in Europe, with PV increasingly replacing conventional means of generating electricity. On the other hand, (retroactive) regulatory changes – most recently in Italy – damage the stability of the market, and hence investors’ trust in solar as an asset class. 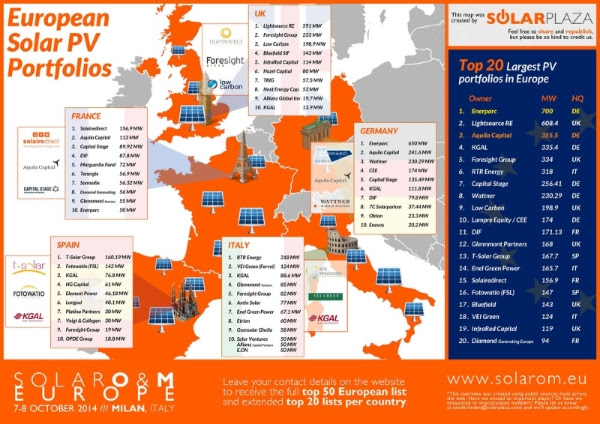 In preparation for Solar O&M Europe, the leading conference on maximising returns from PV assets, we have created an overview of the largest portfolios in Europe, as well as a breakdown per country. The European Top 20 and country Top 10s are visible in the map above. If you’d like to access the full Top 50, please leave your contact details here:
http://www.solaromeurope.com/largest-pv-portfolios-map/

Here are some interesting findings that came up:

“The largest portfolios are predominantly located in Germany and the UK”

The 10 largest portfolios are located in Germany (Enerparc, Aquila Capital, Wattner,– 1,121 MWp in total) and the UK (Lightsource, Low Carbon and Bluefield – 946 MWp in total). Spain is represented by the T-Solar and Fotowatio FSL portfolios. RTR Energy makes it into the top 10 on behalf of Italy, and Solairedirect does the same for France. 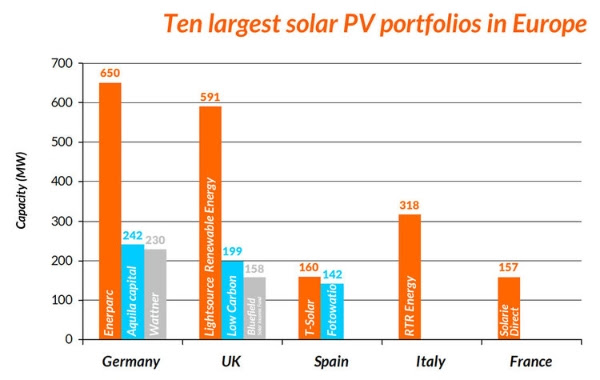 “The largest portfolios are growing larger”

This is reflected through the numbers provided by the asset owners in the overview: Of the 50 portfolios in the overview, 11 shared their plans for portfolio additions before 2015, totalling a range of 0.8 GW to 1.5 GW. This is due partly to the ongoing consolidation between portfolios (as discussed at our Secondary Markets Conference in July), and partly to the new assets that are constructed (most of them in the UK).

“The level of fragmentation varies a lot per country” 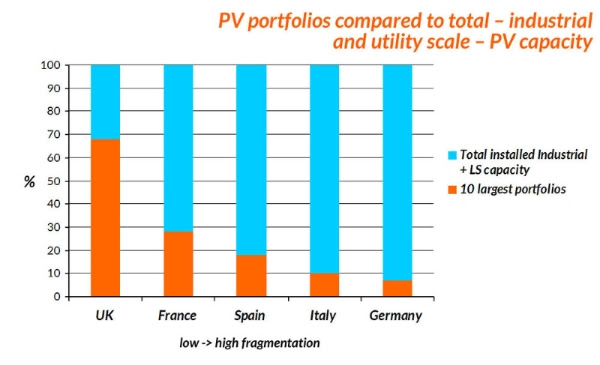 The 50 largest portfolios consist on average of 30 plants and have an average size of 130 MWp. Narrowing down to the 20 largest portfolios, we note an average number of 51 plants in the portfolio and a total capacity of 244 MWp. The top 10 portfolios register averages of 76 assets and total portfolio size of 341 MWp. Interestingly, the average plant size across these different batches does not differ a great deal (between 4.17 and 4.78 MWp). The graph below shows that the larger portfolios simply pool more assets together, but not necessarily larger assets. 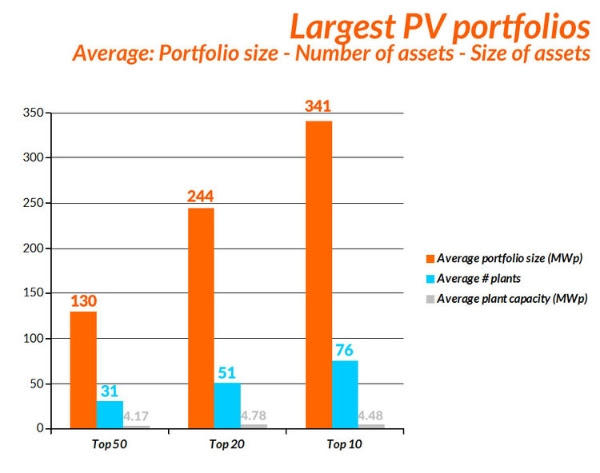 “Average portfolio sizes differ between countries, but the biggest portfolios distort the picture” 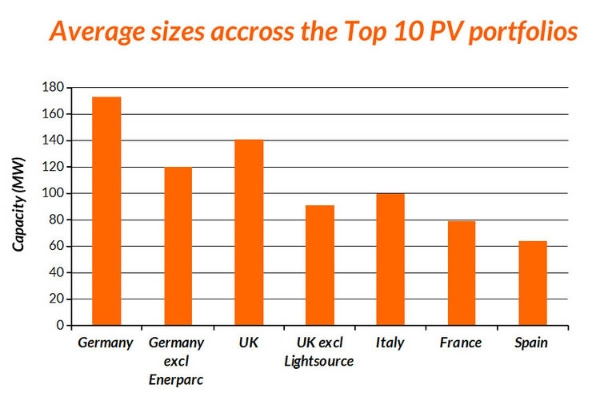 Asset management is more widely taken care of in-house than O&M. 7 out of 10 asset owners with portfolios larger than 100 MW indicate in-house asset management, versus nearly 80% of the smaller portfolio owners. Whether there is a trend in this rather than just interesting numbers will become clear in the following versions of this overview. 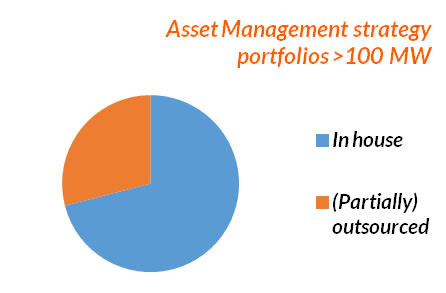 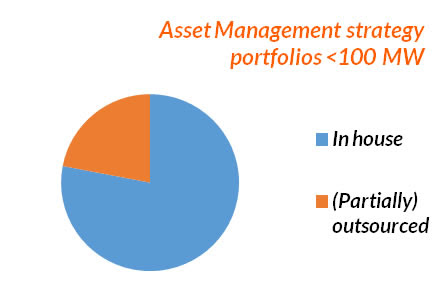 Several large portfolio owners don’t simply outsource their O&M to a third-party service provider or the EPC responsible for construction; for instance:

A conclusion that could be drawn from this is that portfolios, once they start to have a critical mass, tend towards in-house O&M. This will definitely form one of the topics of discussion at the conference in October.

Of the asset owners who provided information on their O&M strategy, 60% claim to outsource O&M; 24% handle it themselves; and the remaining 16% indicated to have O&M partially in-house and partially outsourced. 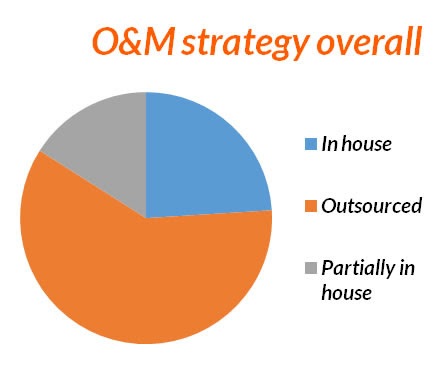 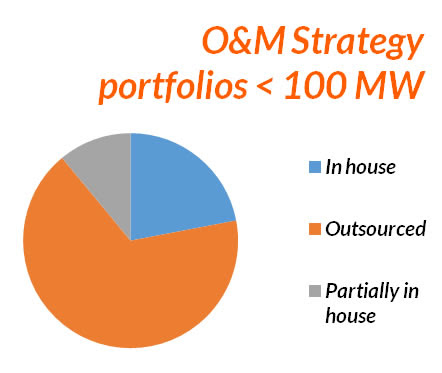 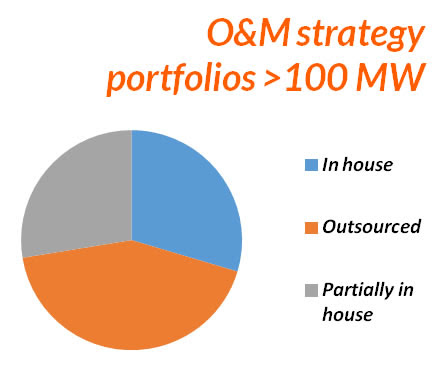