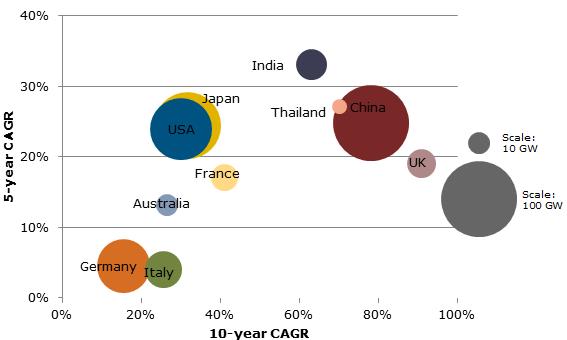 Three of the Major Asia-Pacific countries are set to see annual demand double in 2014.

The outliers in this trend are the UK and Australia. The UK has seen significant growth over the past two years as aggressive incentive policies have propelled large-scale ground-mount development. Australia meanwhile has struggled amidst continued policy cuts and regulatory uncertainty.

The graphic below shows the top 10 single-country markets globally by 5- and 10-year compound average growth rates (CAGRs), through 2018. Each bubble represents forecast cumulative market size by 2019. The UK, China, and Thailand are projected to have the highest 10-year CAGRs, though partially this is due to the small size of these markets (sub-100 MW) in 2008. Legacy European markets, particularly Germany and Italy, see lower 10-year growth rates as they have experienced annual demand declines over the past few years.

Over the next five-years, India, China, and Japan are forecast to see the highest growth rates, with China alone projected to pass the 100 GW cumulative installation mark in 2018. The U.S. will see somewhat slower growth than these Asian markets, but will still be the third-largest cumulative market globally on account of its historic strength in the PV industry and its continuous growth over the past decades.

The biggest threats to these demand and growth forecasts come mainly in the form of policy and regulatory risks. The Chinese end-market has been built largely as an extension of the government’s upstream manufacturing push and is supplied almost exclusively by domestic suppliers through the PV chain. China is now the only major solar market in the world that can service its own end-market purely through domestic supply. The rise of this Chinese manufacturing base has also created backlash in other markets, and import restrictions and duties continued to be applied on many solar PV products.

The risk of further supply disruption stemming from trade investigations is real, as is the threat of market collapse in single-policy driven countries. Only by reducing costs and making PV more competitive against other energy sources will new areas open, thus reducing the risk of market collapse or trade barriers.