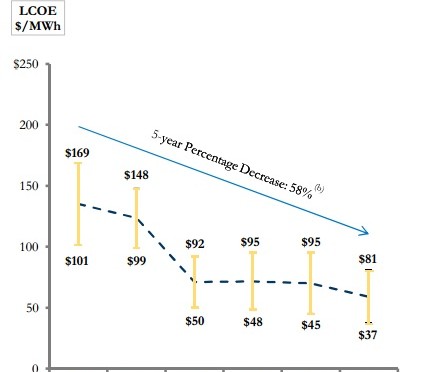 Lazard Ltd (NYSE:LAZ) has released its Levelized Cost of Energy Analysis – Version 8.0, an in-depth study comparing the cost of generating energy from conventional and alternative technologies. Lazard’s Global Power, Energy & Infrastructure Group has been publishing the study since 2008.

The study shows the acceleration of an ongoing trend: Utility-scale solar and wind power are increasingly cost-competitive with traditional energy sources such as coal and nuclear, even without subsidies. The study also highlights the ongoing need for diverse power generation technologies, especially in regions with limited renewables resources.

The study offers a variety of insights, including the following selected highlights:

*The costs of generating electricity from all forms of utility-scale solar photovoltaic (PV) technology continue to decline dramatically. The study estimates that the levelized cost of energy (LCOE) of leading PV technologies has fallen by nearly 20% in the past year, and nearly 80% in the last five years.

*In many parts of the world, utility-scale solar PV continues to increase its cost advantage over conventional generation as a source of peak energy, without any subsidies (appreciating the important qualitative differences related to dispatch characteristics and other factors).

*Land-based wind-generation costs also continue to decline dramatically. The study estimates that the LCOE of leading technologies has fallen by more than 15% in the past year, and nearly 60% in the last five years. However, offshore wind generation is currently at least twice as expensive as land-based, and therefore not cost-competitive without subsidies.

*Battery storage technologies, a potential complement to intermittent energy resources such as wind or solar, continue to be very expensive and not cost-competitive without subsidies. However, the LCOE of “next generation” battery storage technologies could decline by as much as 40% by 2017, given expected reductions in capital costs, operation and maintenance costs, and improvements in efficiency.

*Large-scale conventional generation projects (such as IGCC or nuclear) continue to face a number of challenges, including: high absolute costs; significant cost contingencies; competition from natural gas in many parts of the world; and policy uncertainty. Notwithstanding these issues, alternative energy sources will not be capable of meeting the baseload generation needs of an advanced economy for the foreseeable future.

The Levelized Cost of Energy Analysis – Version 8.0 reflects Lazard’s approach to long-term thought leadership, commitment to the sectors in which it participates, and focus on intellectual differentiation. Version 8.0 is posted at http://www.lazard.com/insights.