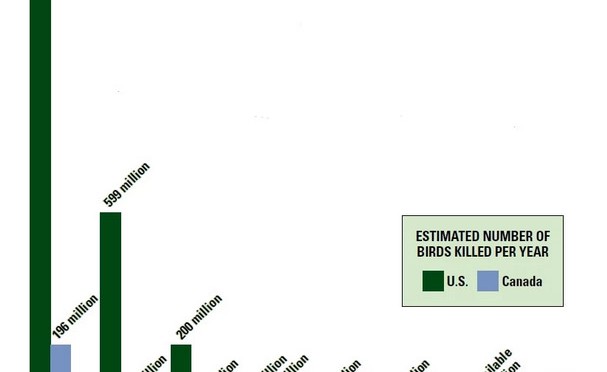 Wind turbines kill between 214,000 and 368,000 birds annually — a small fraction compared with the estimated 6.8 million fatalities from collisions with cell and radio towers and the 1.4 billion to 3.7 billion deaths from cats, according to the peer-reviewed study by two federal scientists and the environmental consulting firm West Inc.

“We estimate that on an annual basis, less than 0.1% … of songbird and other small passerine species populations in North America perish from collisions with turbines,” says lead author Wallace Erickson of Wyoming-based West.

For those who don’t have an envelope nearby to do the math, that’s about 10,000xmore deaths from just house cats than from wind turbines.

And that’s not even looking at some of the other biggest bird killers out there: building and vehicles. That’s probably millions, if not hundreds of millions or billions, of other birds right there. In the grand scheme of things, wind turbines are probably lost in the margin of error.

Here are the numbers from a different source, the 2014 State of Birds report (pdf):