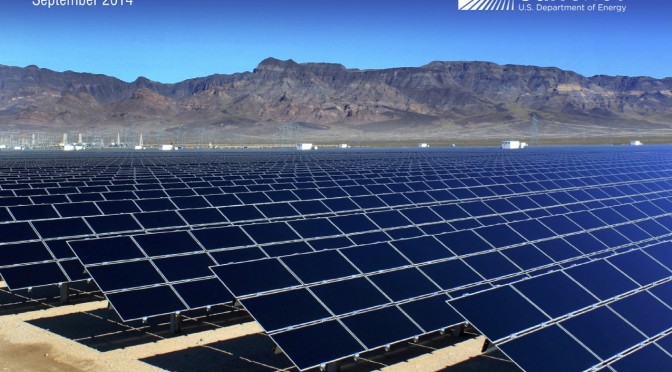 The price of solar energy in the United States continues to fall substantially, according to the latest editions of two annual reports produced by the Department of Energy’s Lawrence Berkeley National Laboratory (Berkeley Lab).

A third Berkeley Lab report, written in collaboration with researchers at Yale University, the University of Texas at Austin and the U.S. Department of Energy (DOE), shows that local permitting and other regulatory procedures can significantly impact residential photovoltaic (PV) prices.

According to the second edition of the Utility Scale Solar report, larger utility-scale solar projects in the United States have made great strides in delivering competitively priced renewable electricity in recent years.

“The price of electricity sold to utilities under long term contracts from large-scale solar power projects has fallen by more than 70% since 2008, to just $50/MWh on average within a sample of contracts signed in 2013 or 2014 and concentrated among projects located in the southwestern United States,” explains Mark Bolinger of Berkeley Lab, one of the report’s authors.

Meanwhile, the average, up-front installed price of utility-scale PV projects dropped by more than one-third since the 2007-2009 period, and average project-level performance has also increased recently.

“With the growth in this segment of the solar market in recent years, we are now able to systematically review actual market data to directly observe what large-scale solar projects cost to build, how they are performing, and at what price they are selling electricity,” notes report co-author Samantha Weaver.

According to the latest edition of Tracking the Sun, an annual PV cost tracking report produced by Berkeley Lab, installed prices for residential and commercial PV systems completed in 2013 fell by roughly $0.70 per watt (W) or 12 to 15 percent from the prior year.

“This marked the fourth consecutive year of significant price reductions for residential and commercial systems in the U.S.,” explains Galen Barbose, one of the report’s authors. Within the first six months of 2014, prices for such PV systems in many of the largest state markets have continued on their downward trajectory.

The continued decline in PV system pricing is especially noteworthy given the relatively steady price of PV modules since 2012. In recent years, reductions in the installed price of PV systems have been driven largely by the falling price of PV modules, but that dynamic appears to be shifting.  In particular, the report points to the increasing importance of reductions in soft costs – which include such things as marketing and customer acquisition, system design, installation labor, and the various costs associated with permitting and inspections.

As module prices have fallen, industry and policymakers have increasingly targeted soft costs for further reductions. As Berkeley Lab’s Naïm Darghouth, another of the report’s authors, notes, “The fact that system prices have continued to fall, despite the flattening of module prices, suggests that the various initiatives targeting soft costs are beginning to bear fruit.”

The two Berkeley Lab cost-tracking reports released today also highlight the wide variability in PV system pricing, detailing the installed price differences that exist across states and across various types of PV applications and system configurations.  For example, roughly 20 percent of all residential systems installed in 2013 were priced at or below $3.90/W, while an equal proportion was above $5.60/W.

Based on a third Berkeley Lab report released today, How Much Do Local Regulations Matter?, some of this variation in residential PV pricing is driven by differences in local permitting and other regulatory procedures.

In particular, based on data from Vote Solar and Berkeley Lab, variations in permitting among cities can drive differences in average residential PV prices of as much as $0.18/W, or $900 for a typical residential PV installation. Based on data from DOE, meanwhile, variations in not only permitting but also a wide range of other local procedures (interconnection, planning and zoning, net metering and financing) can drive even-larger PV price differences among cities: two different statistical models estimate maximum city-level average price differences of $0.64/W and $0.93/W, or approximately $3,000 for a typical PV system.

“A variety of efforts are underway to make local procedures less onerous, and more conducive to solar market growth,” explains Ryan Wiser of Berkeley Lab. “These results highlight the magnitude of PV price reductions that might be possible through streamlining burdensome local regulatory procedures.”

The three reports, along with related summary slide decks, 2-page fact sheets and data files (as applicable), are available for download at:  http://emp.lbl.gov/reports/re. Upcoming webinars on these reports will be announced in the near future.

This research was supported by funding from the U.S. Department of Energy SunShot Initiative. The SunShot Initiative is a collaborative national effort that aggressively drives innovation to make solar energy fully cost-competitive with traditional energy sources before the end of the decade. Through SunShot, DOE supports efforts by private companies, universities, and national laboratories to drive down the cost of solar electricity to $0.06 per kilowatt-hour.