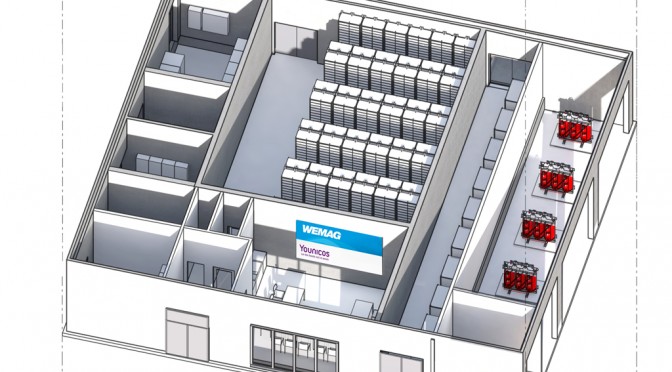 The 5 megawatt lithium-ion unit was designed by the Berlin-based grid and storage specialists Younicos for WEMAG, a supplier of green electricity based in the northern German city of Schwerin.

The commissioning of the fully automated unit marks the first time in Europe that a stand-alone battery is stabilizing fluctuations in grid frequency, thus helping to safely integrate wind and solar energy into the existing grid.

“The first commercial battery storage system on this scale is an important step towards a successful energy transition,” said Federal Minister Sigmar Gabriel at the opening ceremony. “Batteries are especially well suited to providing control power to stabilize grid frequency. In combination with wind and solar generation, this can ensure the future stability of the power system. WEMAG’s battery power plant is a good example of the commitment of municipal utilities to the energy transition, which can inspire similar projects in other parts of Germany.”

“Up to now the power grid has been largely stabilized by inflexible coal-fired power plants, which can only use a fraction of their output for control power. This blocks space in the grid, increasingly forcing wind and solar generation to be taken offline,” explained Clemens Triebel, CTO of Younicos. “Our battery park avoids this economic impact because it is much faster and more precise than a thermal power station. Thus, our 5 megawatt battery in Schwerin provides the same control power as a conventional 50 megawatt turbine,” the Younicos co-founder added.

“In the WEMAG grid area, more than 80 percent of the power consumed already comes from wind and solar generation – making us a front runner in renewable energy. We therefore feel committed to bringing to market new, more efficient solutions for the energy transition,” adds Thomas Pätzold, CTO of WEMAG AG. “Our battery storage unit shows the way forward: it is the best technical solution for smoothing naturally intermittent renewable feed-in, and it is also commercially very attractive.” In addition to receiving initial development funding of 1.3 million Euros from the innovation program of the Federal Environment Ministry, the unit will earn its keep by competing in the primary frequency regulation market. “In the future, the battery will also provide other system services, such as reactive power and black start capability, thus offering further economic advantages,” Pätzold continued.

Ewald Woste, Chairman of WEMAG AG and CEO of Thüga AG, added: “With this battery power plant, WEMAG is making a significant contribution to the development of storage technology. We are demonstrating that intelligent short-term storage is already a commercially attractive investment both for individual companies and for the economy as a whole.”

Younicos designed and built the turnkey storage unit in 12 months. Housed in a hall the size of a school gym, 25,600 lithium-manganese oxide cells can store and discharge power in milliseconds. Cell supplier Samsung SDI guarantees the performance of the battery power plant for 20 years. Five medium-voltage transformers, each weighing four tons, connect the battery to both the regional distribution and the 380kV high-voltage grids.

Michael Sterner, Professor for Energy Storage at OTH Regensburg added: “From a scientific perspective it is clear that battery power plants can make major technical contributions to system stability. With battery prices falling sharply, their use reduces costs and thus makes macroeconomic sense. In a recent study of storage that I led for the think tank “Agora energy transition,” we suggested making technology open to ensure existing and future flexibility, and thus giving storage a fair chance by removing barriers.”

Frequency regulation is a system service that brings power supply and demand into balance by making short-term adjustments. Up to now, frequency regulation was chiefly provided by conventional power stations that can only adjust production inaccurately and sluggishly. This results in so-called “must-run” capacities that will, according to the Energy Research Centre in Lower Saxony, create an economic impact of over 5 billion Euros by 2017. Commercially viable large-scale battery storage avoids this negative effect by helping to make our energy economy more efficient.