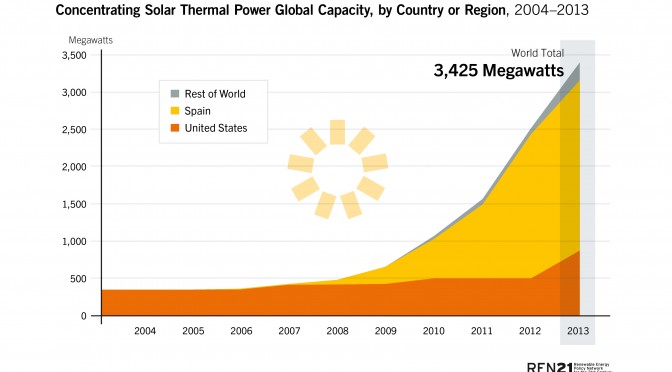 The United States and Spain continued their global market leadership. However, a global shift to areas of high direct normal irradiation (DNI) in developing-country markets is accelerating.

Global installed capacity Concentrated Solar Power (CSP) has increased nearly 10-fold since 2004; during the five-year period from the end of 2008 to the end of 2013, total global capacity grew at an average annual rate approaching 50%.
Parabolic trough technologies represented all of the facilities added during the year, as well as the majority of plants under construction by mid-2013. Towers/central receivers continued to increase their market share, however, with significant capacity added in early 2014.

The United States became the leading market in 2013, adding 375 MW to end the year with almost 0.9 GW in operation, and just short of 1 GW under construction.

U.S. capacity took another significant leap in early 2014, when the 377 MW Ivanpah plant started feeding electricity into the grid.8 Upon its completion, the Ivanpah plant, based on tower/central receiver technology, was the largest solar thermal electric facility of any type operating in the world.
Spain sustained its global leadership in existing CSP capacity, adding 350 MW in 2013 to increase operating capacity by 18%, for a total of 2.3 GW at year’s end.

Parabolic trough remained the dominant technology in Spain, making up all of the capacity that came on line during the year. Due to policy changes in 2012 and early 2013 that placed a moratorium on new construction in the country, no new Concentrated Solar Power plants were under construction by the end of 2013.

Thus, the United States is set to maintain its position as the leading CSP market in 2014.
In other markets, capacity nearly tripled during 2013, to just under 250 MW.12 Additions included the 100 MW Shams 1 plant in the United Arab Emirates and a 50 MW plant in Rajasthan, India (both parabolic trough plants), and the first phase (10 MW) of a 50 MW tower/central receiver plant in Delingha, China.

Several additional countries had small pilot plants in operation, including France, Germany, Israel, Italy, South Africa, South Korea, and Turkey.
During 2013, CSP continued to expand to new markets in Asia, Latin America, and particularly across Africa and the Middle East.

South Africa remained one of the most active markets, with 100 MW of parabolic trough and 100 MW of power tower capacity under construction at year’s end.

In neighbouring Namibia, preliminary evaluation of a 50 MW plant with TES was under way.

Over USD 600 million was pledged in 2013 to support Algeria, Egypt, Jordan, Libya, Morocco, and Tunisia in bringing more than 1 GW of CSP to the regional market.

As of early 2014, construction was under way in Morocco (160 MW) and Egypt (100 MW).
In the Middle East, Kuwait opened bidding procedures for a 50 MW CSP plant with thermal storage, expected to be operational in 2016.

Saudi Arabia announced plans to spend USD 109 billion on more than 50 GW of renewable energy by 2032, 25 GW of which will come from Concentrated Solar Power (CSP).

In Israel, construction was scheduled to begin in 2014 on the first phase (121 MW) of a 250 MW CSP plant in the Negev Desert.
Elsewhere around the world, Chile advanced towards its first commercial Concentrated Solar Power (CSP) capacity with the award of a 110 MW tower/central receiver tender in 2013.

In India, six of the Concentrated Solar Power plants being developed under the Jawaharlal Nehru National Solar Mission (JNNSM) were held back by technical, procurement and financing delays, as well as apparent errors in solar resource assessments.

Italy’s market—hindered by regulatory challenges in the past—received a boost after the feed-in tariff introduced in December 2012 attracted licence applications for over 200 MW of new CSP capacity.
CSP technologies are being used to support an increasing number and range of hybrid electricity generation activities and processes, and are being applied to augment steam production at coal, gas, and geothermal power plants.

The 44 MWth Kogan Creek Solar Boost project under construction in Australia is expected to start supplementing existing coal-based steam generation when operations commence in 2015.
In some markets, CSP continues to face challenges related to strong competition from solar PV technologies and environmental concerns, with  Concentrated Solar Powerin the United States being delayed, withdrawn, or converted to solar PV.

While global growth of CSP is expected to fall short of past projections, interest in CSP plants using TES is growing in a number of markets, where it is seen as a valuable source of renewable dispatchable electric capacity.
Emerging markets such as Saudi Arabia and Chile have made TES mandatory for future CSP developments.

The industry continued expanding into new markets in 2013. Yet while global growth of the sector remained strong, revised projections, fed by increasing competition from declining solar PV costs, led a number of companies to close their CSP operations.
The top companies in 2013 included Abengoa, Acciona, ACS Cobra, and Torresol Energy (all Spain); Brightsource and Solar Reserve (both United States); Schott Solar (Germany); and AREVA (France). German firm Siemens announced the closure of its CSP business after losses of USD 1 billion or more since 2011, while Schott Solar closed its 400 MW U.S. plant to focus on winning projects in the Middle East.
As of early 2013, Abengoa Solar had the world’s largest portfolio of Concentrated Solar Power plants in operation or under construction, and Spanish companies continued to lead the industry with ownership interest in almost three-quarters of CSP capacity deployed around the world.

However, the dead stop in the Spanish market pushed Spanish CSP developers further afield in search
of development opportunities.
The limitations of synthetic oils and molten salts as heat transfer media have driven research into a range of alternatives, such as superheated steam; ternary salts; graphite storage; ceramic storage; and rocks, pebbles, and slag.

The growing potential of TES systems was showcased when the system at Spain’s Gemasolar plant enabled uninterrupted power generation for consecutive days.
A trend towards larger plants continued, as evidenced by the commencement of operations at the Ivanpah and Solana plants in the United States and by the scale of many of the plants under construction in the MENA region. Growing evidence emerged of the potential cost reductions of larger plants, relating to their ability to work at higher temperatures and achieve greater efficiencies.

Research on hybrid CSP applications, and the augmentation of steam production at traditional power plants, continued in 2013.
In the United States, the National Renewable Energy Laboratory (NREL) and the Idaho National Laboratory launched joint research on the augmentation of geothermal plants with CSP, while the U.S. Department of Energy pledged USD 10 million for integration of CSP at the 500 MW natural gas-fired Cosumnes Power Plant in Sacramento, California.