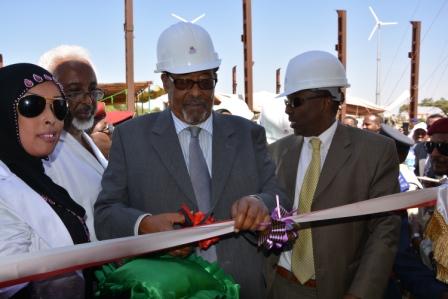 The Hargeisa based Egal International Airport is to start utilizing wind power. This development follows the official launch by the Somaliland president Ahmed Mahmud Silanyo of project funded by the USAID and implemented by the Program for Economic Growth at the Egal Airport in Hargeisa. 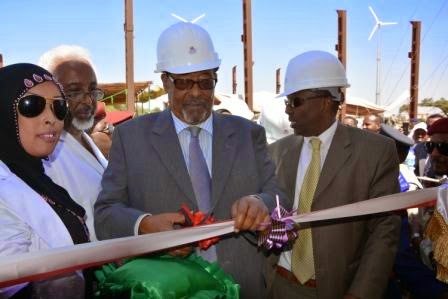 “I extend my thanks to the donors and implementers of this project which shall help minimize the use of electricity provided by diesel powered generators as is the norm now” said president Silanyo at the function at Egal airport.
Pledging his administration’s support towards projects with the objective of availing renewable energy sources the head of state said that the proper use of the 12 months of Sunshine in the country as well as abundant wind could spearhead much needed economic growth and help create jobs.

Windmills set to supply Egal airport with sufficient powere sourced from renewable energy
According to the president these five wind energy facilities which are geared towards meeting the total power needs of Egal the country’s main international airport are to be followed by similar four additional wind energy facilities in Las Anod where they are expected to create jobs for local residents as well as provide sufficient and cheap electricity.
The official launch of the renewable energy project at Egal airport was witnessed by various dignitaries from USAID, the government, Parliament among others.
Listen to the president Silanyo speech at the launch
Through its Partnership for Economic Growth program the USAID has also facilitated the drafting of an energy law in partnership with the Somaliland Ministry of energy and mineral.
According to the Minister of Energy and Minerals Eng Hussein Abdi Duale Electricity rates in Somaliland are high due to a disjointed network of independent providers that have their own grid and use unreliable, dilapidated equipment adding that the city loses nearly 40% of its electricity due to technical problems and antiquated materials.
Diginitaries at the launch of the first wind powered electricity supply in somaliland
The draft law and regulations are expected to establish the right conditions for growth in the energy sector, with a focus on expanding reliable, efficient and affordable electricity services, powered by both conventional and alternative sources that would help promote investment in the Somaliland economy.
Both Somali and international legal and energy experts helped develop the law, ensuring that it reflects local aspirations and is consistent with international best practices.
http://santamarta-florez.blogspot.com.es/2014/06/somalilandpresident-silanyo-launches.html