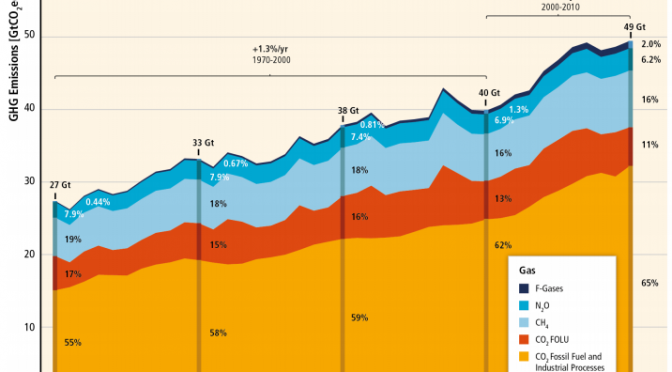 Shares of low or zero carbon energies including those from wind energy, solar power, hydro and biomass should be increased, and fossil power generation without carbon dioxide capture and storage technology be phased out by the end of this century.

Substantial reductions of greenhouse gas are needed in order to limit global temperature increase to 2 degrees Celsius above pre-industrial levels, said a UN panel in Berlin on Sunday.

Releasing its new report on mitigation of climate change, the Intergovernmental Panel on Climate Change (IPCC) said between 2000 and 2010, global emissions of carbon dioxide and other greenhouse gas grew by 2.2 percent every year, more quickly than in each of the three previous decades, when annual growth of greenhouse gas emissions was 1.3 percent.

Without additional efforts to reduce greenhouse gas emissions beyond those in place today, global mean surface temperature would increase in 2100 from 3.7 to 4.8 degrees Celsius compared to pre-industrial levels.

“Climate policies in line with the two degrees Celsius goal need to aim for substantial emission reductions,” said Ottmar Edenhofer, co-chair of the Working Group III of the IPCC’s Fifth Assessment Report, which was responsible for the report released on Sunday.

“There is a clear message from science: to avoid dangerous interference with the climate system, we need to move away from business as usual,” Edenhofer said.

According to scientists, global greenhouse gas emissions must be dropped by 40 to 70 percent compared with 2010 by 2050, and to near zero in 2100, if the two-degree target were to be met.

“Many different pathways lead to a future within the boundaries set by the two degrees Celsius goal,” Edenhofer said, “All of these require substantial investments. Avoiding further delays in mitigation and making use of a broad variety of technologies can limit the associated costs.”

The report said emission reductions are required from sectors of energy production and use, transport, buildings, industry, land use and human settlements. Among the greenhouse gas emitted by human activities between 2000 and 2010, 47 percent directly came from energy supply, 30 percent came from industry and 11 percent from transport.

A large scale of global change are needed in energy supply sector, it said, adding that global CO2 emissions from the energy supply should reduce by 90 percent or more below 2010 levels between 2040 and 2070, and further decline to zero thereafter.

In industry sector, innovation and technologies are needed to improve energy efficiency. Recycling and reuse of materials and products could also contribute to the reduction of emissions.

Other measures include building energy saving buildings, investing in public transport, as well as sustainable land use, which could be used to draw carbon dioxide from the atmosphere through afforestation and reduction of deforestation.

“The core task of climate change mitigation is decoupling greenhouse gas emissions from the growth of economies and population,” said Youba Sokona, another co-chair of the Working Group III.

“Through providing energy access and reducing local air pollution, many mitigation measures can contribute to sustainable development,” he said.