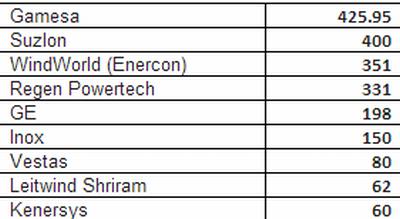 Gamesa, global wind power technology leader, has reached a fresh milestone in India, having commissioned 1,000 MW of capacity since it began to manufacture in the country four years ago.

“Thanks to a broad product range, tailored to the market’s specifics, and the company’s experience and know-how as wind farm developer, Gamesa has managed to establish itself as the country’s leading OEM, with a particularly strong position among independent wind energy products”, according to Ramesh Kymal, President and Business CEO of Gamesa’s Indian operations.

According to BTM Consult, in 2013 Gamesa was the top-ranked OEM in India with a market share of 19%, outperforming local manufacturer Suzlon for the first time in a market which emerged as Asia’s second largest – and the world’s third largest – in 2013 in terms of capacity installed (1,987 MW). In 2013, India represented 22% of total group revenue.