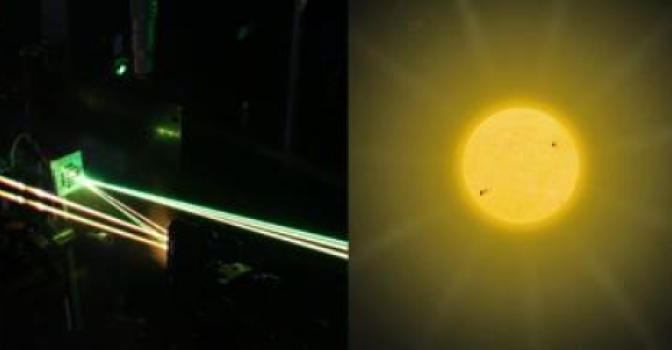 pay someone to do my essay

Although the highest energy light occurs in the ultraviolet and visible spectrum, most solar energy is in the infrared.

There is a trade-off in harvesting this light, so that solar cells are efficient in the infrared but waste much of the energy available from the more energetic photons in the visible part of the spectrum.

When a photon is absorbed it creates a single electronic excitation that is then separated into an electron and a positively charged hole, irrespective of the light energy. One way to improve efficiency is to split energy available from visible photons into two, which leads to a doubling of the current in the solar cell.

Researchers in Cambridge and Mons have investigated the process in which the initial electronic excitation can split into a pair of half-energy excitations. This can happen in certain organic molecules when the quantum mechanical effect of electron spin sets the initial spin ‘singlet’ state to be double the energy of the alternative spin ‘triplet’ arrangement.

The study, published today in the journal Nature Chemistry, shows that this process of singlet fission to pairs of triplets depends very sensitively on the interactions between molecules. By studying this process when the molecules are in solution it is possible to control when this process is switched on.

When the material is very dilute, the distance between molecules is large and singlet fission does not occur. When the solution is concentrated, collisions between molecules become more frequent. The researchers find that the fission process happens as soon as just two of these molecules are in contact, and remarkably, that singlet fission is then completely efficient — so that every photon produces two triplets.

This fundamental study provides new insights into the process of singlet fission and demonstrates that the use of singlet fission is a very promising route to improved solar cells. Chemists will be able to use the results to make new materials, say the team from Cambridge’s Cavendish Laboratory, who are currently working on ways to use these solutions in devices.

“We began by going back to fundamentals; looking at the solar energy challenge from a blue skies perspective,” said Dr Brian Walker, a research fellow in the Cavendish Lab’s Optoelectronics group, who led the study.

“Singlet fission offers a route to boosting solar cell efficiency using low-cost materials. We are only beginning to understand how this process works, and as we learn more we expect improvements in the technology to follow.”

Left: This shows laser set-up in the lab in Cambridge. Right: This is the Celestia sun. (Credit: Left: Sebastian Albert-Seifried / Right: Rights free)

The team used a combination of laser experiments — which measure timings with extreme accuracy — with chemical methods used to study reaction mechanisms. This dual approach allowed the researchers to slow down fission and observe a key intermediate step never before seen.

“Very few other groups in the world have laser apparatus as versatile as ours in Cambridge,” added Andrew Musser, a researcher who collaborated in the study. “This enabled us to get a step closer to working out exactly how singlet fission occurs.”