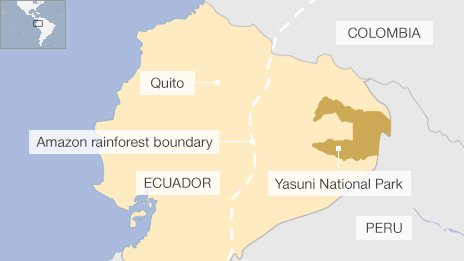 Ecuador has abandoned a conservation plan that would have paid the country not to drill for oil in previously untouched parts of Yasuni National Park in the Amazon rainforest.

President Rafael Correa said rich nations had failed to back the initiative, leaving Ecuador with no choice but go ahead with drilling.

The park is one of the most biodiverse areas in the world.

Hundreds of people gathered in Quito to protest against Mr Correa’s decision.

The UN-backed scheme to attract donations to forego drilling in the east of the park was launched by Mr Correa in 2010.