As the price of photovoltaic solar levels out and the value of concentrating solar power’s storage improves, it is possible that the price of land could become a decisive factor in a solar project’s overall energy costs. A new land-use analysis demonstrates the choice of technology could be crucial.

Researchers at NREL drew on acreage data from 72 percent of the 6.7 gigawatts of operating and under-construction photovoltaic and concentrating solar power solar capacity in 3Q 2012.
The research team that produced the report Land-Use Requirements for Solar Power Plants in the United States used two land-use measurements. The total area was taken as the typically fenced offsite boundaries on blueprints. 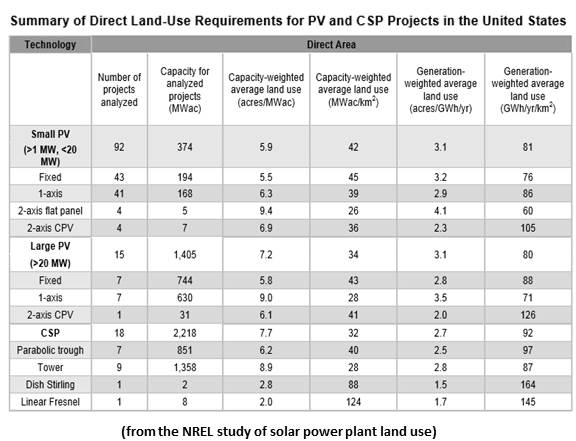 The direct-impact area was smaller. It included only the land on which there were solar arrays, access roads, substations, service buildings, and other infrastructure.
“Having real data from a majority of the solar plants in the United States will help people make proper comparisons and informed decisions,” lead author Sean Ong said. The report, “Land-use Requirements for Solar Power Plants in the United States,” was written with NREL colleagues Clinton Campbell, Robert Margolis, Paul Denholm and Garvin Heath. 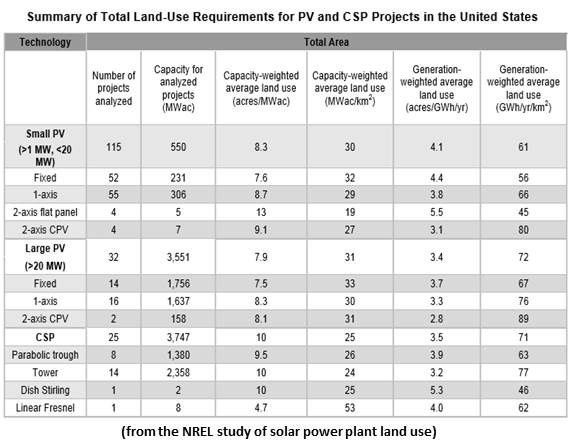 Ong gathered data from 72% of the solar power plants installed or under construction in the United States. Among the findings:
By the third quarter of 2012, the United States had deployed more than 2.1 gigawatts of utility-scale solar generation capacity. Another 4.6 gigawatts was under construction. There has been a long-running debate over the comparative land needs for various forms of energy, old and new. But that’s not the purpose of the new report, Ong and Denholm emphasized.
“The numbers aren’t good news or bad news,” Denholm said. “It’s just that there was not an understanding of actual land-use requirements before this work. However, we were happy to find out that many of the solar land use ranges and estimates used in the literature are very close to actual solar land use requirements that we found.”
These land-use estimates can also be compared with other energy-production land uses. For example, a study by Vasilis Fthenakis and Hung Chul Kim of Columbia University (2009) found that, on a life-cycle electricity-output basis—including direct and indirect land transformation—utility-scale PV in the U.S. Southwest requires less land than the average U.S. power plant using surface-mined coal.
A previous NREL report, “Land-use Requirements and the Per-capita Solar Footprint for Photovoltaic Generation in the United States,” had estimated that if solar energy was to meet 100% of all electricity demand in the United States, it would take up 0.6% of the total area in the United States.
This time, the data come not from estimates or calculations, but from compiling land use numbers from actual solar power plants. Every solar energy site analyzed in the study is listed in a detailed appendix.
“All these land use numbers are being thrown around, but there has been nothing concrete,” Ong said. “Now people will actually have numbers to cite when they conduct analyses and publish reports.”
NREL previously had released a report on land-use needs for wind power. Doing the same other generation resources including coal, natural gas and nuclear — estimating land use via huge sample sizes — would help inform decisions, Denholm said.
The report provides fundamental data that can be used to understand the impacts and benefits of solar. “Modelers and analysts, people looking 10 or 20 years into the future can use this report to evaluate the impacts solar energy may have,” Denholm said.
NREL is the U.S. Department of Energy’s primary national laboratory for renewable energy and energy efficiency research and development. NREL is operated for the Energy Department by the Alliance for Sustainable Energy, LLC.
http://santamarta-florez.blogspot.com.es/2013/08/what-is-best-solar-power-technology-to.html
http://www.nrel.gov/docs/fy13osti/56290.pdf