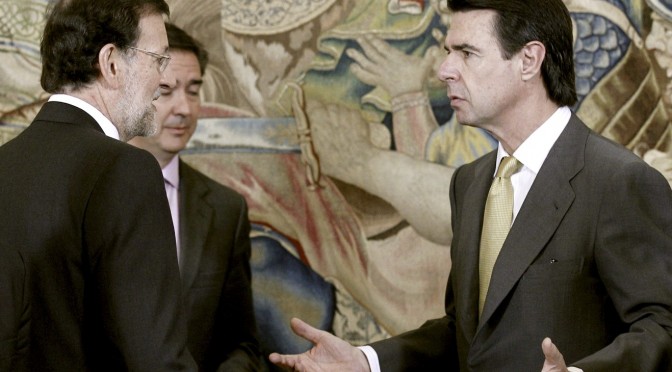 But in hard times, it will be winds in Finland, not Spain, that make the finished product spin.
Last year, the plant delivered a wind turbine park to Malaga in southern Spain and another to Burgos, in the north, said factory manager Javier Trapiella. “Now we don’t produce for Spain,” he added. “It has all stopped.”
For green energy producers, Spain has changed from a paradise with generous public support to a markedly less agreeable home.
Prime Minister Mariano Rajoy’s conservative government is imposing an austerity regime to plug an accumulated energy sector deficit of 26 billion euros ($34 billion).
On Friday, the horizon darkened further with the approval of reforms cutting annual state aid for renewable energies by more than one billion euros.
The change is enough to place at risk huge strides in the Spanish wind energy industry.
Spain ranks as number four globally in terms of installed wind energy but has dropped to seventh place in terms of new projects, according to the Global Wind Energy Council.
Cuts in state aid of 35 percent, removing subsidies for new wind turbines since the start of 2013, and then the latest changes announced on Friday: the sector has been hit hard and manufacturers are the first to feel the pain.
In February, French group Alstom closed two factories in Spain and laid off 373 employees.
“The economic crisis and the absence of a stable regulatory framework have slowed domestic demand,” the AEE said, stressing the lack of activity in its Spanish sites.
Spain’s Gamesa, which is among the industry’s world leaders, gave the same reasons as it laid off 606 of its 4,800 staff in Spain and closed two blade factories in recent months.
Gamesa notably pointed to the “regulatory uncertainty” , the persistent economic crisis and financial problems in the sector, especially in southern Europe.
Making a wind turbine is almost a work of craftsmanship, said Gamesa’s Trapiella. “You need good hands,” he said. The fibreglass and carbon fibre blades measure 62.5 metres (205 feet) and weigh 15 tonnes each.
When finished they will leave by truck overnight for the port of Bilbao to be shipped by sea to Finland. About 40 blades are scheduled for delivery by February.
“If 90 percent of our sales were in Spain 10 years ago, it is the exact opposite today with 90 percent of sales coming from abroad,” said Jose Antonio Cortajarena, Gamesa’s corporate managing director.
“We are in more than 50 countries,” he said, citing Mexico, Brazil and India as key markets.
“Even if our corporate headquarters are in Spain, the risk, our dependance on the Spanish market, is limited.”
http://santamarta-florez.blogspot.com.es/2013/07/the-rajoy-government-policy-destroys.html