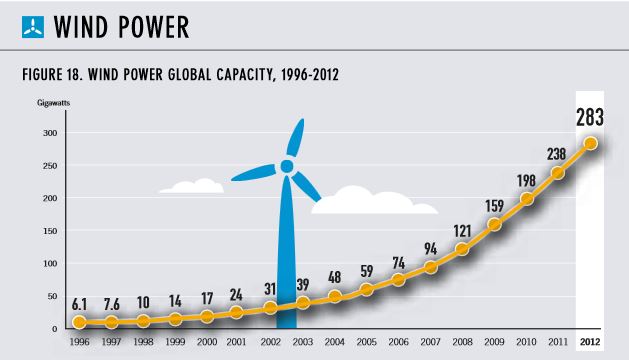 In another record year for wind power, at least 44 countries added a combined 45 GW of wind energy capacity (more than any other renewable technology), increasing the global total by 19% to 283 GW.

The United States was the leading market, but China remains the leader for total installed capacity. Wind power is expanding to new markets, aided by falling prices.
Almost 1.3 GW of capacity was added offshore wind energy (mostly in northern Europe), bringing the total to 5.4 GW in 13 countries.
The wind energy industry has been challenged by downward pressure on prices, combined with increased competition among turbine manufacturers, competition with low-cost gas in some markets, and reductions in policy support driven by economic austerity.
During 2012, almost 45 GW of wind power capacity began operation, increasing global wind capacity 19% to almost 283 GW. It was another record year for wind power, which again added more capacity than any other renewable technology despite policy uncertainty in key markets.
The top 10 countries accounted for more than 85% of year-end global capacity, but the market continued to broaden.
Around 44 countries added capacity during 2012, at least 64 had more than 10 MW of reported capacity by year