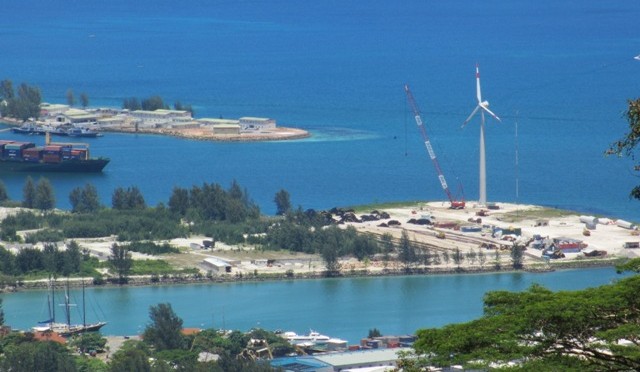 The Port Victoria Wind Power Project, Masdar’s six-megawatt wind farm in the Republic of Seychelles, which consists of eight wind turbines across two small islands off the coast of Mahe to provide electricity to more than 2,100 homes, will be inaugurated today.

Before the wind farm began operations, the Seychelles was entirely dependent on imported fossil fuels for its energy generation. The integration of clean, sustainable wind energy is helping the island nation decrease its power outages, address its long-term energy security and reduce its carbon footprint. The project will produce nearly 7 GWh of clean energy per year, displacing approximately 10,000 tonnes of carbon dioxide annually and power more than 2,100 homes.
The Port Victoria Wind Power Project is a major step toward meeting the Seychelles energy policy, which sets a target of producing 15 percent of its energy from renewable sources by 2030.
The project was financed through a US $28 million (AED 102.8 million) grant provided by the Abu Dhabi Fund for Development – a government entity with a mission to enhance the living standards in developing nations. Masdar developed and delivered the project, which is owned and operated by the Government of the Seychelles.

Masdar, which developed and delivered the project and which is owned and operated by the government of the Seychelles, said: “The new project plant is Seychelles’ first large-scale, renewable-energy project which accounts for more than 8 per cent of the grid capacity on the archipelago’s main island of Mahe, where 90 per cent of the country’s residents live.”

According to Masdar, five wind turbines will be located on Romainville Island and three will be at Ile du Port.The 750 kilowatt wind turbines are supplied by a South Korean turbine manufacturer and contractor.