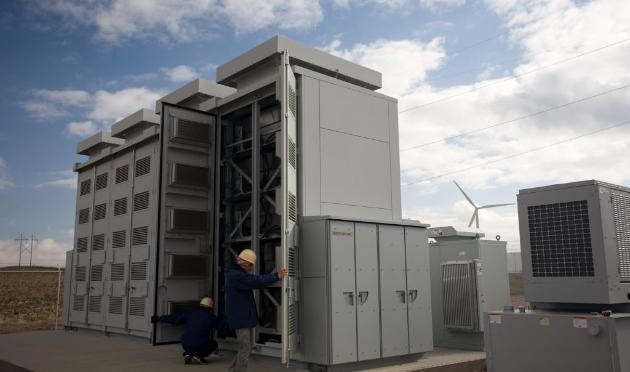 Xcel Energy Inc. installed the $4.7 million battery in 2008 next to a Luverne, Minn., wind farm and operated it safely for more than two years.

The sodium-sulfur battery was shut down in October 2011 on the advice of its Japanese manufacturer after a similar unit caught fire there.

The only battery in Minnesota large enough to store electricity from wind turbines is going back into operation after a 15-month shutdown and overhaul to reduce the risk of fire.

Now, the Minneapolis-based utility says, the Luverne battery has been rebuilt by manufacturer NGK Insulators of Nagoya and is likely to be back in service by February.

“It is a brand-new battery at this point,” Albert Choi, Xcel’s Denver-based manager of next-generation research, said during an interview.

The battery can store enough electricity — 1 million watts — to provide power to 500 homes for 7.2 hours. Researchers who analyzed output of the “Wind-to-Battery Project” in 2009-11 found that it successfully stored electricity and released it as needed.

“It wasn’t like we had problems,” added Mark Willers, CEO of MinWind III, which owns the adjacent wind farm and substation and sells the output to Xcel. “It ran perfectly.”

Utilities like Xcel, which has the most wind power on its system of any U.S. utility, are looking at energy storage because wind farms often generate power at night and at other times when demand is low. Pike Research of Boulder, Colo., estimates the world market for grid storage, including batteries, could exceed $30 billion a year by 2022.

When the Luverne unit began operating in 2009, it was the nation’s largest wind-farm battery. On Wednesday, Duke Energy said a new, 36-megawatt system is storing power at its Notrees Windpower Project in Texas, making it the nation’s largest wind farm battery. The project received a $22 million U.S. Energy Department grant that the Charlotte, N.C.-based power company matched.

One shortcoming of some new battery technologies is the fire risk.

After the September 2011 battery fire in Japan, NGK halted production of the batteries and advised customers, including Xcel and 19 other customers in North America, to stop using them. NGK later determined that a faulty cell had leaked molten material, triggering a short circuit and fire.

While NGK has addressed issues with its sodium-sulfur technology, new battery worries have grounded the Boeing 787 Dreamliner. U.S. and Japanese safety investigators are looking at lithium-ion batteries and related electrical components after two incidents in which the batteries caught fire or overheated aboard Dreamliners. Those batteries are made by Japan’s GS Yuasa Corp.

NGK said it has redesigned its grid-scale batteries, adding fuses and insulation. Aki Sawafuji, a company spokesman, said the company completed replacing or refurbishing all of its North American customers’ batteries in January and has resumed production.

“We believe that the measures we have taken are sufficient to allay uncertainties about the future safety of the technology,” Sawafuji said in an e-mail.

When Xcel’s battery in Luverne goes back online, it again will store power from the farmer-owned wind farm and release it to the grid as needed, said Xcel’s Choi. Besides this so-called load-shifting, the batteries also help regulate and smooth power on the grid, according to a 2011 research report.

Choi said the price of batteries will have to drop before they become a better investment than power plants fueled by natural gas, for example. He said Xcel remains interested in the technology and is testing two other bulk-storage batteries in Colorado.

“We don’t see battery technology as a viable solution in the next few years,” Choi said.

Craig Wilkins, Zinc Air’s executive vice president, said the company hopes to sell six units this year. They’re about half the price for the same wattage as NGK units but with less backup time, Wilkins said.

Dan Juhl, CEO of Juhl Wind, a Pipestone, Minn.-based wind-farm developer, said his company is considering installing a Zinc Air battery at a Minnesota site, possibly this spring. Juhl said he likes the company’s “Zinc Redox” technology, which promises to be nontoxic and nonexplosive.

Wilkins confirmed that Juhl and Zinc Air have been talking but have not reached a deal.

“Storage has always been the Holy Grail of renewables,” Juhl said. “What we are working on is combining renewable energy with a little bit of storage to become a fully functioning power plant.”