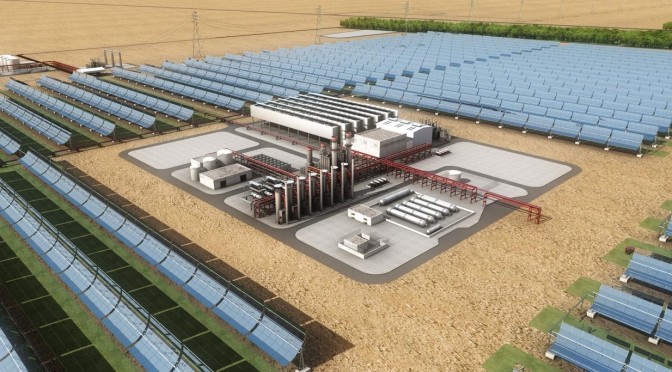 Shams One has been a a learning experience for Masdar – constant dust and sand have forced new innovations in cleaning and wind blocking technology, and the plummeting cost of photovoltaics may challenge the commercial viability of CSP.

Nonetheless, Shams One will go online as scheduled in coming months and make a significant dent in Abu Dhabi’s commitment to produce 7% of its electricity from renewable sources.

About 2 hours south west of the city of Abu Dhabi is the first phase of one of the largest concentrated solar power projects in the world: Shams One.

It’s a 100MW solar thermal project which aims to power 20,000 homes with the combination of the sun’s energy and a small amount of natural gas.

Concentrated solar power (CSP) is not photovoltaics – rather, it’s the focusing of the sun’s energy to turn water into steam which powers a traditional turbine.

In the case of the Shams project, a joint venture between Masdar, Total SA and Abengoa Solar, parabolic mirrors focus the sun’s rays on a type of special oil which gets heated to more than 300 degrees Celsius.  That oil transfers its heat energy to water which is turned into steam.

The CSP plant uses natural gas to super-heat the steam to upwards of 500 degrees which then drives a turbine.   The use of natural gas as a “booster heater” is actually a common practice in CSP because the heating oil isn’t stable enough to be brought to the optimal high temperature required for the steam turbine.

It also allows the plant to operate at night and maintain a higher degree of generating stability.