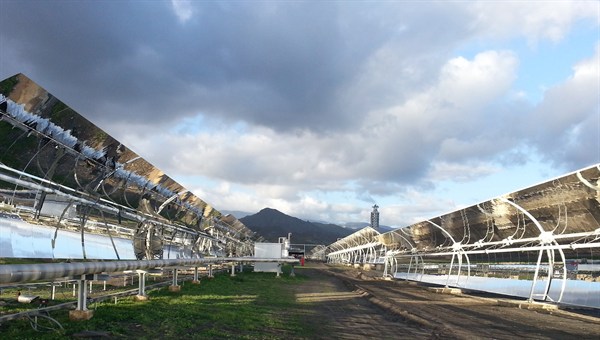 In the power plant, steam for generating power is produced directly in receiver tubes in the parabolic troughs.

Everything in one tube

In the test facility in Almería, parabolic mirrors reflect the Sun’s rays onto receiver tubes. These tubes absorb the solar radiation, convert it into thermal energy, and pass it on. What is special about this test facility is that the tubes contain water, instead of the more usual oil; the water is directly heated and turned into steam.

The superheated steam generated in this way can be used to drive a turbine in a power generator. Researchers refer to this as a ‘once-through concept’.

“The main challenges with this type of direct steam generator are the high operating pressure – approximately 110 bar – in the receiver tubes and the control of the entire process. But the advantages outweigh these; with the ‘once-through concept’, there is no longer a need for heat exchangers and many other additional components such as oil treatment facilities,” says project leader Fabian Feldhoff from the DLR Institute of Solar Research, describing the benefits of the new technology. “This enables a reduction in the cost of solar power generators. Furthermore, power generators using this technology can operate at higher temperatures, making the generation process more efficient.” Using a 1000-metre-long collector array with a thermal output of three megawatts, researchers in the DUKE research project (Durchlaufkonzept – Entwicklung und Erprobung; Once-through Concept – Development and Testing) are attempting to demonstrate the ‘once-through concept’ on an industrial scale. The new test facility offers one-of-a-kind opportunities for research as well as for continuing to develop this technology.

Advantages of water as a thermal transfer medium

Parabolic trough power generators are currently the most proven solar thermal power generators. Almost every commercial facility constructed to date uses synthetic thermal oil in the receiver tubes of the mirror array. The disadvantage of such thermal oils is that they can only be heated to a maximum of 400 degrees Celsius, which gives rise to limitations in the level of efficiency that can be attained. The facility now being tested by DLR can operate at temperatures of up to 500 degrees Celsius using a new receiver design. Using water as the heat transfer medium has the additional advantage of being low-cost, and it is neither flammable nor harmful to the environment.

In facilities that use the ‘once-through concept’, the steam for the turbine is evaporated and superheated in one continuous process in the collector array. Previous commercially operated direct steam generation units work using the recirculation concept. With this method, the water flows through three areas in the solar array – the evaporation area where the steam is generated; the ‘steam drum’, where the liquid water and steam are separated; and the ‘superheating area’, where the steam is heated to even higher temperatures. Facilities of this type were preferred because they are easier to control. The ‘once-through concept’ now being developed and tested in Almería certainly presents greater challenges in terms of controlling the facility; however, the scientists believe that, overall, operation of the system will be more cost-effective while at the same time more efficient. Furthermore, facilities of this type are more easily scalable, as solar power generators can easily be expanded. This is particularly important for further cost reductions in the long term.

The DUKE solar research project (Durchlaufkonzept – Entwicklung und Erprobung; Once-through Concept – Development and Testing) has been funded by the German Federal Ministry for the Environment, Nature Conservation and Nuclear Safety (Bundesministerium für Umwelt, Naturschutz und Reaktorsicherheit; BMU) and is carried out together with industrial partners. The test facility is being operated at the Plataforma Solar de Almería (PSA) under an already-successful cooperation with the Spanish organisation CIEMAT (Centro de Investigaciones Energéticas, Medioambientales y Tecnológicas; Centre for Energy, Environment and Technology Research). The project is expected to run until April 2014.

The Plataforma Solar de Almería is a test centre for high-temperature concentrating solar technology. Since the very beginning, DLR has played a major role in its planning and construction, and has been making use of the facility with on-site scientific staff to conduct its solar technology testing and development work in close collaboration with its Spanish partner, CIEMAT, which owns and operates the facility.