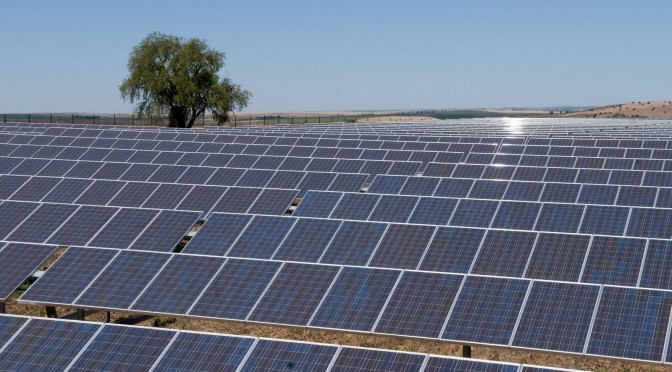 Why are efficient and affordable solar cells so highly coveted? Volume.

The amount of solar energy lighting up Earth’s land mass every year is nearly 3,000 times the total amount of annual human energy use.

But to compete with energy from fossil fuels, photovoltaic devices must convert sunlight to electricity with a certain measure of efficiency.

For polymer-based organic photovoltaic cells, which are far less expensive to manufacture than silicon-based solar cells, scientists have long believed that the key to high efficiencies rests in the purity of the polymer/organic cell’s two domains — acceptor and donor.

Now, however, an alternate and possibly easier route forward has been shown.

“We’ve shown that impure domains if made sufficiently small can also lead to improved performances in polymer-based organic photovoltaic cells,” says Harald Ade, a physicist at North Carolina State University, who led this research. “There seems to be a happy medium, a sweet-spot of sorts, between purity and domain size that should be much easier to achieve than ultra-high purity.”

Solar cell conversion efficiency in polymer/organic photovoltaic cells hinges on excitons — electron/hole pairs energized by sunlight — getting to the interfaces of the donor and acceptor domains quickly so as to minimize energy lost as heat. Conventional wisdom held that the greater the purity of the domains, the fewer the impedances and the faster the exciton journey.

Ade and his co-authors became the first to simultaneously measure the domain size, composition and crystallinity of an organic solar cell. This feat was made possible by ALS beamlines 11.0.1.2, a Resonant Soft X-ray Scattering (R-SoXS) facility; 7.3.3, a Small- and Wide-Angle X-Ray Scattering (SAXS/WAXS/) end-station; and 5.3.2, an end-station for Scanning Transmission X-Ray Microscopy (STXM).

Says Collins, the first author on the Advanced Energy Materials paper, “The combination of these three ALS beamlines enabled us to obtain comprehensive pictures of polymer-based organic photovoltaic film morphology from the nano- to the meso-scales. Until now, this information has been unattainable.”

The international team used the trifecta of ALS beams to study the polymer/fullerence blend PTB7:PC71BM in thin films made from chlorobenzene solution with and without the addition (three-percent by volume) of the solvent diiodooctane. The films were composed of droplet-like dispersions in which the dominant acceptor domain size without the additive was about 177 nanometers. The addition of the solvent shrank the acceptor domain size down to about 34 nanometers while preserving the film’s composition and crystallinity. This resulted in an efficiency gain of 42-percent.

“In showing for the first time just how pure and how large the acceptor domains in organic solar devices actually are, as well as what the interface with the donor domain looks like, we’ve demonstrated that the impact of solvents and additives on device performance can be dramatic and can be systematically studied,” Ade says. “In the future, our technique should help advance the rational design of polymer-based organic photovoltaic films.”

This research was primarily supported by the DOE Office of Science, which also supports the ALS.