Japan added more than 1 GW of solar installed capacity in 2011.

The new feed in tariff structure was implemented on the 1st of July in 2012, wherein solar has been given the highest tariff than the other renewable sources of energy.

With JPY 42/ kWh, it is also one of the highest solar tariffs in the world. Following the implementation of the new structure, many domestic and foreign companies have announced their plans to set up solar parks in the country. More than 99% of the projects signed off after the new structure was introduced were solar projects.

According to recently published research report “Japan Solar Power Sector Analysis” by KuicK research highlights the efforts being made into making Japan a solar powered country.

Japan is one of the world’s largest importers of fossil fuels which suffice most of its energy needs. Since it does not have considerable oil, gas and coal reserves, it has to depend on these imports for electricity generation. Post the Fukushima disaster, all but three of Japan’s nuclear power plants have shut down posing an imminent power crisis. To avert the electricity shortage, the government has fast tracked the development of solar power and has come up with attractive policies and incentives to encourage investment in this sector to affect a greater growth. The current installed solar capacity has reached almost 5 GW, making Japan the third largest nation in terms of solar power, behind only Germany and Italy but by a large margin. Japan was, in the late 90s and early 2000s, the world leader in solar power but the withdrawal of certain effective policies and shifting focus on nuclear power decreased its solar growth considerably. 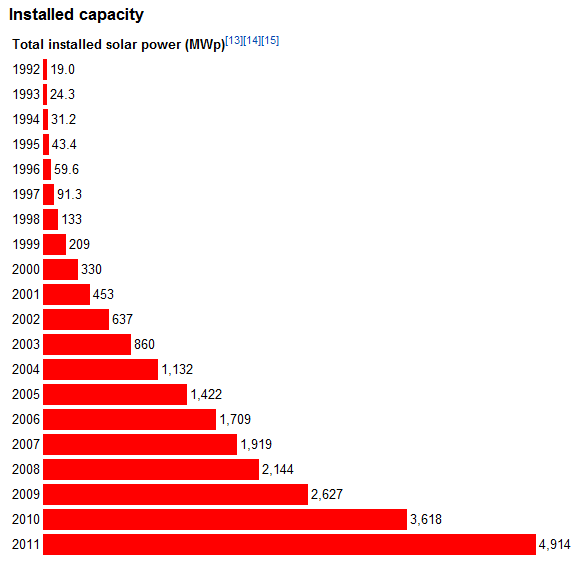 It has revamped its solar power development and added more than 1 GW of solar installed capacity in 2011, the largest in a single year. Majority of this is grid connected and distributed through the utility companies.

The country has started a renewable energy revolution under which it is developing all the renewable energy sources but solar has been given the clear preference given the immense potential, lower environment regulations and encouraging feed in tariffs. The country has an average solar potential of 1,130 kWh/ kWDC/ year with more than half of the cities experiencing more than average solar energy throughout the year.

Japan is also the world leader in manufacturing solar cells, modules and other equipment required for solar power generation. This expertise and credibility certainly augments the country’s efforts to become solar dependent and, thus, less reliant on fossil fuel exports or nuclear power.

The research report “Japan Solar Power Sector Analysis” details the other projects that the government has implemented and planned, apart from the new feed in tariff structure, to entice the companies, institutions and households to employ solar energy for power generation. There are subsidies provided on the modules which have resulted in a steady decrease in the prices of these modules, enabling more people to switch to solar power generation.

The report is a comprehensive text detailing all the factors responsible for the current high growth of the solar industry in Japan while extrapolating these factors to show that the future of solar in Japan is indeed bright.