“America’s Atlantic coast has some of the best offshore wind energy resources in the world, the technology to harvest it is ready right now, and we have workers ready to do the job,” said Catherine Bowes, the National  Wildlife Federation’s senior manager for new energy solutions and lead author of the report. “We need to take advantage of this golden opportunity to make our electricity supply cleaner, more wildlife-friendly, and more secure.”

Over 1,300 gigawatts of energy generation potential have been identified off the Atlantic coast.  By developing just a fraction of our offshore wind resource–52 GW, we could power approximately 14 million U.S. homes while creating over $200 billion in new economic activity along the coast.

A detailed summary of offshore wind activities occurring in each of the Atlantic coast states is included in the report and it should be noted that we are getting very close to making offshore wind a reality in the United States. Over 2,000 square nautical miles of federal waters are already designated for wind energy development off of Massachusetts, Rhode Island, New Jersey, Delaware, Maryland, and Virginia and more efforts are underway in other Atlantic Coast states. Environmental reviews finding no significant impacts have been completed in the aforementioned states, and leases are expected to be issued for some of these areas by the end of the year.

Despite the progress, more work needs to be done by our state and federal elected officials to ensure the success of offshore wind energy in the United States.  Some of the recommendations mentioned in the report were that:

• Congress needs to step up and provide much-needed tax incentives – such as the Investment Tax Credit, Production Tax Credit, and Advanced Energy Project Credit – to advance this new job-creating industry.

• Federal regulators must continue to move forward with an efficient, environmentally-responsible permitting process for offshore wind projects that grants leases to developers by the end of 2012. Leases must include strong safeguards for coastal and marine wildlife. 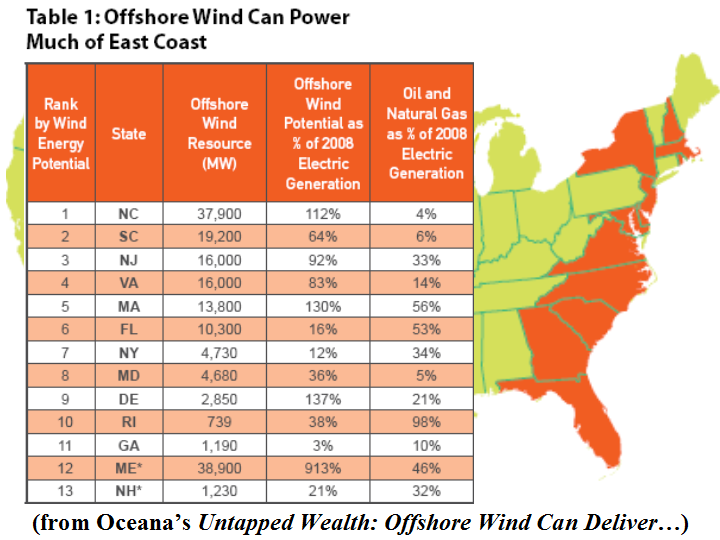 Here in the Southeast we hold about two thirds of the east coast’s shallow water offshore wind resource. In Georgia alone, we have approximately 14.5 gigawatts of offshore wind potential, which is enough to provide a third of the states electricity. However, Governor Nathan Deal is currently one of only two Atlantic Coast Governors not working with the Department of Interior’s ‘Smart from the Start‘ program to kick-start wind energy jobs and development and streamline the permitting process for wind farm development.